Well we are nearing the end of the Canadian crime drama Motive and in this last but one episode entitled “Chronology of Pain” there is a bounty of former Stargate actors in addition to the regular and recurring cast members I’ve mentioned before. The episode deals with the murder of a very powerful and influential judge and as always we know who did but the motive is what eludes and is slowly revealed as the story plays out.

Interesting to see Louis without the beard 🙂 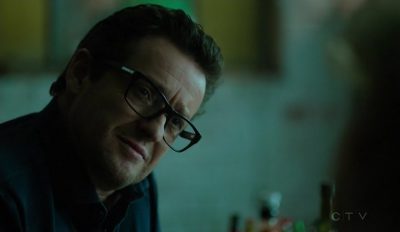 S4E9 Remains To Be Seen

A bumper line up of former Stargate actors on the latest episode of Motive with Keegan Connor Tracy as Heather, Ty Olsson returning as Tim Kelly, David Nykl playing Darnell Murphy. And Haig Sutherland as Dave Briggs, Sr. It was an intricate and very interesting episode which started off a little meh but finished very strong. Delighted to see so many familiar faces, I tend not to keep track of who is appearing on a lot of shows just to maintain the surprise:)

Yet again I delve back into Motive after watching their seventh episode of this fourth season. Guest starring in the episode “Foreign Relations” was Elyse Levesque playing Whitney Fraser and Calum Worthy playing Derek Holstadt in a case of a missing sister and a global conspiracy with ties to a British politician. The episode was also directed by Andy Mikita who has a long track record within Stargate and of course Motive has many regulars and recurring actors who appeared on Stargate over its long run.

Motive has returned to Canadian television for the second part of the fourth season with a excellent episode entitled “The Dead Hand” in which a mother fights to defend her son convicted of killing her daughter. The episode stars Christina Cox (SG1 & SGA), Aleks Paunovic (SG1 & SGA) and Veena Sood (SG1) as well as series regulars/recurring characters who can trace their careers through Stargate and beyond.

Say what you will about crime dramas in Motive we have an original well almost unique spin on the formula and for us they fully exploit the local Canadian talent who over the years also supplied the Stargate franchise with many a guest star and extra a few of which made names for themselves in front of the cameras. In the latest episode of Motive entitled “Frampton Comes Alive” we get Michelle Harrison (SGU & SG1) playing Lisa Wyatt, Daniel Bacon (SG1 & SGA) playing  Mike Wilson and finally Bob Frazer ( SG1 ) who was Reverend Allen. The episode deals with an utter piece of “$*” who really got what he deserved but things are not quite as straightforward as it seems and that’s why the titular motive comes into play and it ended with a bang 🙂

Terry Chen was fully front and center in last weeks episode of Motive which was called “The Amateurs” and is the 11th in the current season, Terry played Ken Leung in a story which had three murders so one for each of the detectives and shown how understaffed the medical examiner’s office is as well.

Kathleen Munroe kicked serious ass in the latest episode of Motive titled “Purgatory” playing the wonderfully wicked and from a certain perspective entirely justified Ashley Kirkwell in an episode spanning 5 years of story time with betrayal, jealousy, drugs and money all in the mix resulting in quite a few deaths, a few quite grizzly:)

Yep it’s that time of the week again and I’ve just watched the latest episode of Motive “Reversal of Fortune” and we got three former Stargate actors in prominent guest roles. Lets begin with Agam Darshi (SGA & SGU) who played Ginelle Mercier the tarot reader who was central to the events in the story, Josh Blacker (SGU & SGA) was playing a client of hers a Mr Martin Porterman and finally David Lewis (SG1) who was in the arc element of the series as Sergeant Gavin Saunders.

Once again Motive delivers a story that you can see going one way but eventually coming out as something very different, nicely done.

Yes another week and another new episode from the third season of Motive which presented us with guest starring roles for two former actors from Stargate in the episode Pilot Error. We’ll begin with Jody Thompson who played the pilot Bridget Vinton who appeared just the once on Stargate SG1 in the episode Bounty and again on Atlantis in the episode Vegas. Sonja Bennett played Chelsea Richmond in Pilot Error and we last saw her on Stargate Atlantis as Dahlia Radim.

Pilot Error was a good episode, a few twists from the main story and some underlying menace from the arc with ongoing flirtation between Oscar and Betty and the question mark over Oscar and his condition.

Another good episode of Motive the other night season 3’s “Fallen” with both the primary story and the season arc equally entertaining and we had two faces from Stargate days as guest stars, there was Simon Longmore who was playing the trucker Roy Biggs and then Patrick Sabongui who played Lance. 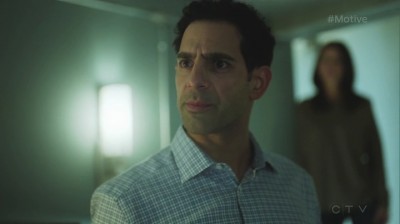 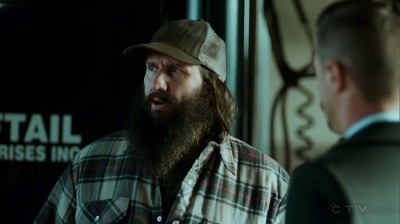 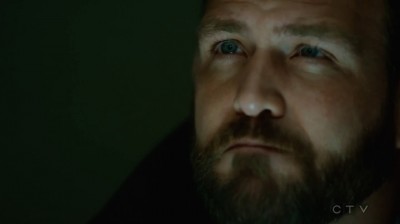 Well where do I start with the latest episode of the Canadian crime drama Motive?

In the latest episode The Glass House (S3E4) we have a couple of guest stars who have also appeared on Stargate and not forgetting the recurring character of Superintendent Boyd Bloom playing by Roger Cross and the series co-star Louis Ferreira as Detective Oscar Vega. In the latest episode we get to see Jodelle Ferland (SG1 & SGA) playing the sixteen year old Sophie Glass and Jennifer Spence (SGU) as her neighbour Melissa Dixon and for trivia John Cassini who played Peter has a brother who has guest starred on SG1, small world. This was an interesting episode which led you down a disturbing path but wasn’t all it appeared to be, a good episode with a satisfying conclusion and didn’t see until well into the story.

Well there was a bumper turn out of former Stargate actors on the Motive episode “Nobody Lives Forever” which aired on CTV on May the 8th. Along with the series star Louis Ferreira and recurring second season character Samantha Turner played by Laura Mennell we had guest appearances by Alex Zahara, Michael Kopsa, Ona Grauer and Barbara Kottmeier. The episode was nice and twisty with motives for quite a few people and as usual many of the characters are not that sympathetic, everyone is guilty of something:)

Noah Danby plays Zachary Cain in the Canadian produced drama Bitten, the show is based on the novels by Kelley Armstrong and takes a more mature look at the current werewolf genre.

Mike Dopud guest starred on Motive in the recent episode “Dead End” as Michael Boxton, Mike seems to be keeping himself busy appearing on many of the shows I watch on a regular basis.

I had an hour to kill tonight so picked out an episode of Motive from the second season I hadn’t seen it, the episode was called “Overboard” and yes I immediately thought of Kurt Russell and Goldie in the bikini but hey that’s just me:) This story involved the murder of the wife of a wealthy online gambling business owner but as is the style of the show we know who the victim and the murderer are straight away and the entertainment is watching the detectives figure out why the events happened as they did. In Overboard we had two former Stargate actors taking leading guest starring roles, the first Niall Matter who played Damian Cutter and the second Julie McNiven who was Meredith Taylor and both roles had a lot of screen time. Niall has starred in Primeval New World and had a long running recurring lead role on Eureka and made a couple of guest appearances on Stargate Atlantis in the episodes Be All My Sins Remember’d and Tabula Rasa playing Lt. Kemp while Julie played the Lucian Alliance scientist Ginn in eight episodes of Stargate Alliance and had recurring roles on Supernatural and Mad Men.

Overboard was an excellent episode of Motive and worth mentioning that Carlos Bernard also appeared, best known perhaps for his stint on 24.