Castle seems to be hitting a rocky patch as the eighth season draws to a close, the studio seems desperate to give the show a ninth season even to the extent of ditching two of the female actors including Stana. The show like many that have lost their way has gotten a little silly at times and instead of going back to the formula which made it a success the suits don’t seem to have a clue.

Anyhow at least they continue to get some good guest stars even though at this point it smacks of fan appeasement to offset negative press but yay Jewel Staite guest starred on the recent episode “Much Ado About Murder” playing Erin Cherloff.

Jewel Staite is being called upon to assist the Legends of Tomorrow.

Well ain’t that mighty fine news, we’ve been enjoying her performances on our coverage of Atlantis and of course her recent tweets on her pregnancy and newborn 🙂

Congratulations to Jewel and Charlie on the birth of their first child one Wilder Cathcart Ritchie, it’s been fun following Jewel as she tweeted the ups and downs of her pregnancy and the last few days have been interesting when viewed from afar:)

Thank you to the Browncoats at Melbourne Oz Comic Con for totally outfitting our baby. Pretty cunning. 💕 pic.twitter.com/Gpw4p89bc4

Many congratulations to the happy couple and looks like a great place to pop the question.

Hallmark blitzed the holiday period with their crop of new tv movies centered in and around christmas and The Christmas Ornament was certainly not the worst of the bunch, a simply tale of a couple of mildly damaged souls who found each other amongst the chaos that is the holiday season. Yeah you can figure out the ending within minutes of watching the movie but that’s not why you watch these sorts of stories.

Anyhow the movie aired this afternoon in the UK and it featured a few familiar faces from Stargate, one better known but all  accomplished actors with impressive tv resumes. May I present Jewel Staite who played Jenna, Laura Mennell who played Rebecca and Nels Lennarson who played Dale.

On an unnamed planet with a space gate the team investigate a possible Wraith presence which has been terrorising the local village population for many years, it’s referred to as the “Daimos”. As the team hunts the Wraith in the local woodland they discover a young female and track her back to her home which turns out to be a laboratory set up by a local resident to research the feeding system of the youngster in the hopes of removing the need to drain life force from humans. It turns out he rescued the child from the wreckage of a crashed Wraith ship and while there have been incidents of feeding she is fairly “clean” and that the recent attacks were by another Wraith and the discovery of a body soon after proves she did not feed on that human. Carson visits the world to evaluate the research and foolishly reveals the existence of the retro virus which based on the Iratus bug and is designed to strip away the alien elements of the DNA and leave only the humans parts. Ellia the young Wraith girl over hears them and takes the drug but it has the reverse effect causing her to lose control and attack pretty much anyone she sees including the man who has been her “father” for years and yes it does end badly but for quite a few people. 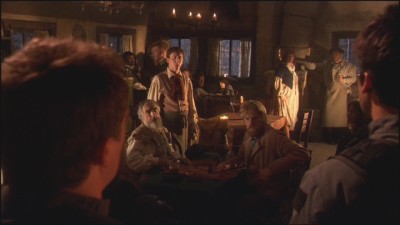 A nice welcome from the locals

Instinct is the first part of an unofficial two parter and stars Jewel Staite as Ellia under quite a bit of prosthetics yet as they said it did allow them to consider her for a larger role later in the series and yes she auditioned for the part. The episode itself is beautiful to look at, there is some superb locations used for the show and the set locations were seamless as was some creative editing to get around a few minor production issues. Jewel really performed well under all the make up as did John Innes who played the local villager who rescued the young Wraith, they had great chemistry. It was interesting to see how difficult a time Ronon had in just accepting the Wraith and it was quite dramatic when he nearly lost it in the lab. Overall it was a good ensemble episode with no one main cast character standing out which allowed the guest stars to shine which was important to the story and while it doesn’t get rave reviews I think the episode worked well and leads very nicely into the next episode “Conversion”. 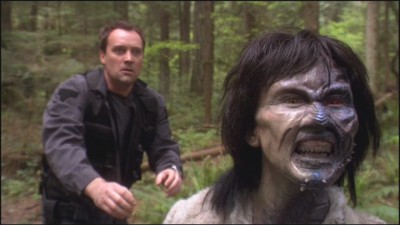 McKay has a way with women

Many thanks for all the feedback on Google+, Twitter, Facebook and this website for both Ex Deus Machina and the Doctor Who special, next week we should have the SG1 episode “Babylon” then a bunch of bonus episodes over the seasonal holidays. We will have more details as and when so for now enjoy the show, send us feedback and if possible an itunes/ stitcher review/rating would be most appreciated:)

Jewel Staite at last weeks Phoenix comicon in a solo panel talking about her time on Firefly, Stargate Atlantis, The LA Complex and her life in and out of television. Alan once again can be heard asking a question at around the 9 minute 20 second mark:)