While making a strategic withdrawl aka running away SG1 gate back to Earth but Tealc is hit while dawdling in the line of fire on the ramp, silly boy. With severe damage to his pouch and without a symbiote to heal him he goes through an extensive convalescence but suffers mental issues as he adapts to being weaker and in his culture less than a man. Daniel starts to have aural memories of his time as an ascended being which eventually reveal the location of Bratac and Ryac and thus a rescue mission is set in motion and Tealc is pretty much ordered to go. On the planet of Erebus captured Jaffa are worked to death mining and refining Naquada for the construction of Goauld ships, the SGC units arrive in time to aid a rebellion. 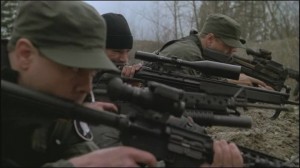 Orpheus is a continuation of two main storylines the fist being the consequences of Daniels ascended status being withdrawn after he chose to act on his ethics and sense of right and wrong and the second is Teal’c and Bra’tac losing their symbiotes and relying on Tretonin. It’s quite difficult before watching the episode to see how these two story lines can merge but using the occasionally visited Jaffa resistance as the glue it works out pretty well. It’s not my favourite episode of the season but the location work is good even if it’s just the old gravel pit and as always there is some nice CGI, the show really never gets that wrong even on a TV budget. 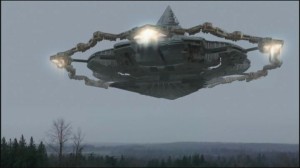 UPS salesman do well at the shipyards

The only real grip and maybe it isn’t even a gripe is that we see Teal’c from a different side, he has rarely been the depressed oh woe is me type and feeling sorry for himself so it’s difficult to see the character in this light. Of course we then get the resolution and payoff as Teal’c fights for himself and his family ultimately achieving the desired results but taking a beating in the process.
Once he realises that what Bra’tac is saying in that the symbiote doesn’t make the man it’s his own strength of character and will that defines him Teal’c is once again the symbol for the rebellion.

Many thanks for the feedback this week and we had the new promo from Colin’s Star Trek podcast. Next week we are covering the fifth episode of the season “Revisions”, join us and why not send in a comment or post something here or on Facebook or Twitter.

Tealc the fire fighter, Tealc the Jaffa, Tealc the man but which one is the real Tealc and that question is the focal point as he struggles to come to terms with his existence even though he is unaware that factors outside his perception are at play.
The Changling was written by Christopher Judge and as you would expect it is Teal’c centric and why not
no one knows the character better then he does and the twist is the multiple realities he exists in and for the most part unaware that his life as a fire fighter isn’t real. 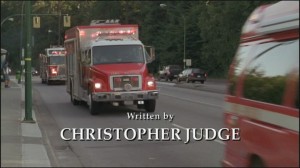 The episode is awash with guest stars playing the characters from his life so Bra’tac, Apophis and Shauna makes important contributions with Jacob and Daniel adding elements to the overall mix.
The overall production of the episode is good, the location work involving a real fire unit is a highlight of the episode since you can not beat fire trucks in any show and the pyrotechnics are just a bonus. The hospital location again adds so much to the episode, the much larger location working well especially the gardens but it’s the merging of the realities through mainly simply practical shots that jolt the senses in a good way. 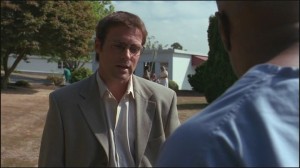 I know that guy!

What is surprising and shouldn’t be is that the big battle that causes the whole situation is never shown, the story actually doesn’t need the excitement or action as the writing and “real world” set pieces work just fine.

Next week we will be covering “Memento” so feedback for that show would be appreciated and a big thank you to all those who contributed to the community this week. Thanks to Colin over on Trek News & Views for the promo we played and barring unforeseen events Colin will be joining us to record the season 6 wrap up show so remember to vote in the season 6 poll:)

A Jaffa rebellion led by a charismatic former first prime of a fallen system lord (Imhotep) has taken shape and drawn the interest of Bratac and Tealc who in turn jockey for the SGC to recognise and aid the rebellion with weapons and other logistical support. SG1 visit the world with a sampling of weapons and aid to meet the man who has bought together remnants of various Jaffa factions including families and while the initial talks go well it soon becomes apparent that all is not well within this community.

The Warrior is standalone episode although naturally sits in the current arc describing the fall of many of the system lords and the fracturing of their Jaffa followers/armies as the power shift continues. On the face of it K’tano is everything you would want in a rebel leader being a strong orator able to give impressive speeches on the fly as well as work within a volatile audience as shown early on when his followers demand weapons and other resources. The fact that Bra’tac and Teal’c are enamoured with K’tano speaks volumes although that may be the case they have been waiting so for long for this step to be taken they were not even willing to admit to themselves the tactics and reality of this rebellion may not be what they would have championed. 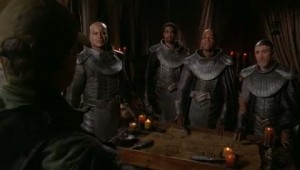 The Warrior was written by Peter DeLuise but based on a story created by Christopher Judge himself and why not write an episode which not only features your own character but his own story arc, it’s good for an actor to be looking to expand his characters narrative especially as too often Teal’s can just be “background”. What is surprising is how fast our favourite Jaffa fall under the “spell” of K’tano (Rick Worthy) even when he employs tactics which are boarding on insane given his resources in men and hardware but the promise of freedom blinds even the most wise. That said when the truth is revealed via a system lord no less which was a nice twist we see Teal’c at his avenging beast but ultimately it’s the usual Goa’uld arrogance that leads to the downfall of this rebellion (for now). 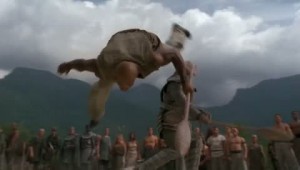 K’tano, watch me mommy I can fly..

The Warrior does have some positives in terms of production, they location is pretty and exploited to it’s full extent and rare for the show they have real interior shots with actual views of the outside of the tents rather then green screen it which has been the traditional way. The interaction of the real world and more controlled interiors adds a lot of texture to the scenes something which would be quite normal in a feature but stands out on a TV budget and while this show didn’t go overboard with CGI the location gate looked stunning as did the Tel’tak surrounded by mist.

The other very spectacular element of this episode is the integration of the unarmed combat discipline Mastaba which was based on the Brazilian art form Capoeira which combines agility, grace and flexibility something which may not be exactly native to the bulked up Jaffa but it does look spectacular. 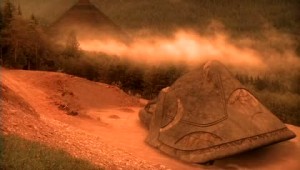 Damn Sat Nav, where the hell are we? 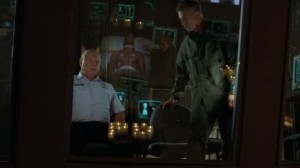 Bratac arrives bearing news of an attack on Chulak by Apophis as he searches for his child. Further investigations lead the SGC to believe they have found the mythical Kheb a world feared by the System Lords where the child has been taken and SG1 with Bratac visit the world.

I really enjoyed this episode simply by listening to the “zen” slanted discussions by the monk as he leads Daniel through the steps required to get his mind in a state when he could understand why the boy needed to be protected and by whom. There are some nice visuals as well as locations used which all add atmosphere to the episode and of course the humour from Jack running into the wall that is metaphysical Daniel. 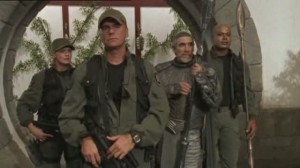