Stargate SG1 season 8 kicks off in the aftermath of the attack on Earth by Anubis. Jack is still a popsicle buried deep in the Ancient outpost under Antarctica and the SGC operations are suspended as Elizabeth Weir overseas operations while conducting multi-national negotiations for the purpose of clarifying the use and ownership of the technology. SG1 are lobbying for use of the gate but a compromise is reached which allows Sam and Teal’c to take the cargo ship and search out the Asgard at the last battle site with the replicators leaving Daniel and Weir to deal with three visiting System Lords.

This is a welcome return to television for Stargate SG1, there was a brief period of time when season 7 was to be the last and the story concluding with a dvd/tv feature film but it’s continued popularity and profitability won out and it returns to Scifi hand in hand with it’s spin off series Stargate Atlantis. 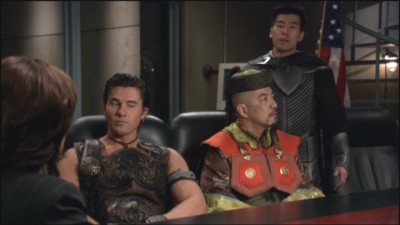 Halloween all the time.

New Order picks up in the chaos surrounding the SGC, America and the nations who have been let in on the secret of the Stargate when a twist in the tale is presented as three System Lords come to negotiate and deal with an Earth capable of defeating Anubis and thus kicking their collective asses as well. As Daniel and Weir play ping pong with a bunch of arrogant and condescending aliens Sam and Teal’c reach out to Thor and discover the Replicators are now free and the war has once again erupted, everything is in flux. 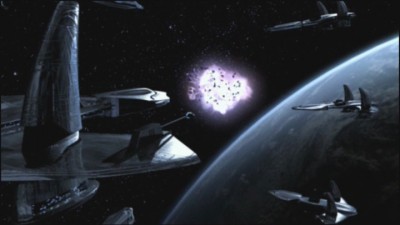 Part 1 of New Order is chock full of goodness but lacks that little spark despite some great dialogue with the System Lords and action with the Asgard and Replicators, the events will and do ratchet up in the second part of the premiere as pressure is applied to both the SGA and the new Asgard homeworld which is now under serious threat. It may have been a better option to make this a feature release as with the DVD as our take on the first part is a little dry but it’s done now but as always let us know what you think, the plan is to release the SGA premiere as an extended release rather than chop it up but if you prefer two sub 1 hour releases that is an option.

This weeks promo is for The Roundtable Podcast which is co-hosted by last weeks guest Dave Robison and next week we will be discussing part 2 of New Order, feedback and general comments always welcome. We are still on the look out for more itunes reviews so make us proud but by all means be honest, all reviews get put into the draw for the Ronon figure signed by Jason Momoa. A big thankyou for the feedback on twitter and facebook this last week, very gratifying and we are looking into doing more episodes in 2013 with a third host so if you are interested let us know via email, twitter, facebook, google+ or the contact forms.
Promo…