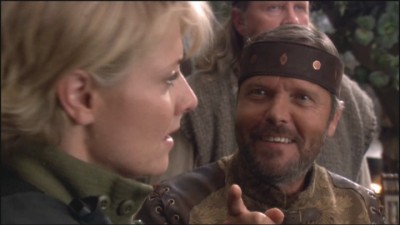 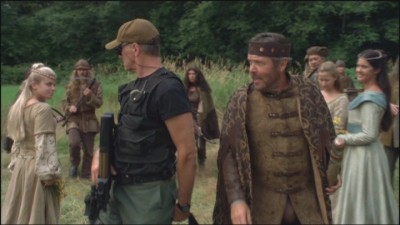 An assault on a Russian convoy and the capture of a Jaffa gets the ball rolling and leads to the kidnapping of Sam while she is off duty. Jack does his own investigation working around the limitations of his status in law enforcement but being more open to the unusual he takes as gospel the eye witness who claimed to have seen “ninjas”. They rope in Maybourne who as it turned out may not be involved with Sam but certainly played a part in the whole situation but can Jack trust him or even put any faith in Simmons another aspect of the NID who have proven to be dodgy to say the least. Finally the truth is revealed and in essence it’s an old tale of those with power and influence plus a ton of cash willing to do anything to survive but with this case some good intentions which went out the window when others started making the choices. 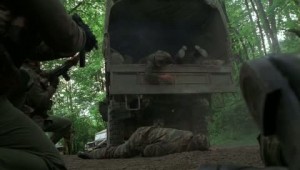 Desperate Measures is a pretty good addition to the NID/Political arc of the show which is beginning to make it’s presence felt. As the series goes on we get a lot more of this sort of complexity between competing factions on Earth (human and maybe not so much) and in the case Conrad while not really being a bad guy puts the pieces in place so when his direct influence is removed the desires of others (the doctor, girlfriend, NID) take over and well it doesn’t end well. 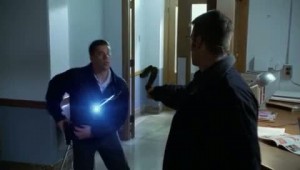 Danny is the MAN

It’s always good to see Harry Maybourne and of course Colonel Simmons is as greasy as always and a seriously creepy Doctor almost overloads the episodes with potential bad ‘uns even before we get the girlfriend who puts common sense to one side or the humans willing to kill for money. When you think about it then it’s pretty much a good example of how corrupt and depraved elements of out world are and how easy it could be for the Goa’uld and others to insert themselves.

When the gate refuses to work a discovery is made which implicates the Russians as owning and using a stargate (the one lost in Thors ship) but they need help as contact with their facility has been lost. On arrival SG1 along with a Dr Markov discover an active gate and all the base personnel dead and one rather surprising person in the deep freeze. While Jack and Tealc explore the base Daniel, Same and Markov take a mini-sub through the gate into this “waterworld” and proceed to get stuck and at the mercy of the intelligence that lives there. 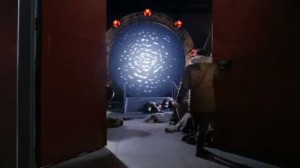 Daniel once again joins us for this episode and a special guest star well known to scifi genre fans joins the show, Dr Markov is played by Marina Sirtis and yes they let her control the mini-sub…

SG1 return from a very rainy mission to find the SGC under tight security after a chemical spill but in the infirmary what seems to be a genuine medical procedure reveals itself to a be more sinister endeavour leaving only Sam and Teal to raise the alarm, aliens are on Earth!

Foothold hails the return of Maybourne (Tom McBeath) as Sam is faced not knowing who to trust so goes outside the SGC, he is of course his own foolish self but there is a lot of comedy value especially in this episode in many ways despite the “invasion” the story is a fun adventure ride. 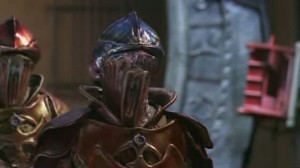 SG1 visit a world seemingly of high technology but devoid of humanoid life but not all life. Tealc is surprised when a large insect like creature lands on him and when provoked it stings him and within seconds it’s poison is tearing his body apart and SG1 flee the planet.

Back on Earth the NID appropriate Tealc to study the infection but he escapes and hides out in a near by city were he meets Ally a young girl who befriends him while both the SGC and NID try to find him for two very different reasons.