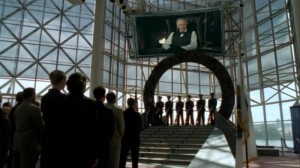 They say the SGC never bring back anything with military application but then Area51 wheel out the X-301 it kinda proves that wrong, the merging of two wrecked Death Gliders along with some human tech has produced a space capable aircraft which can take the fight into orbit.

Of course problems crop up, always the case with any X plane but not normally one where the aircraft is taken over by some rogue code and flys it off into deep space in one of the most advanced anti-theft devices ever seen. Jack and Teal’c go along for the ride and it’s left  pretty much pure to chance that a solution is found and implemented.

Tangent is a visual effects and special effects heavy episode and many may consider two guys stuck in a cockpit to be a rather boring idea but the pacing is good and the antics of the SGC in rescue attempts adds to the suspense even if we know they are good to be saved. 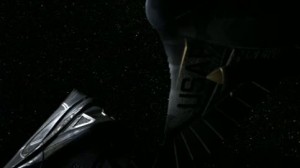 Blue Danube should be playing