“What is Travelers?
Travelers is a new sci-fi TV series co-produced by Canadian TV channel Showcase and Netflix. The series followers a small group of “travelers”, a team of time travelling…”

We take a look at the premiere episode of Travelers on this week podcast, one of the bonus shows and delayed a while so that with Showcase and Netflix broadcasts we shouldn’t be spoiling anything. Travelers was created by Brad Wright one of the minds behind the Stargate television franchise and the show features many familiar actors and crew who also graced Stargate with their talents. Travelers at heart is a time travel series centered on a time of individuals who have returned into their past to prevent a disaster that has global impact, in their time the world and the human race are dying and all their technology is focused on repair the damage done even if it ultimately leads to their own deaths or more accurately their births.

While Travelers is freely available thanks to the Netflix deal (outside of Canada) it can only help but give this opening season the maximum exposure and thus provide the impetus for a second season because after watching the show I really do want to see how the events pan out, it was a pretty good season cliffhanger providing satisfying conclusions to plot elements introduced and opening up some very intriguing options if explored. This premiere episode (also named Travelers) basically introduces us to the main team as they attempt to blend into a world that is very much unlike the one they came from and trying to make no false steps as they are forced to continue the lives of the people they replace. The variety of the group and their situations maximises the story telling options and as the series continues the show just gets better and better as more complexity is added and yes as they change the past their future changes as well. I can highly recommend Travelers to any fan of science fiction and with Eric as the lead his presence really does add a level of audience awareness a lot of shows in the genre would kill for.

Our thanks to Steve for joining to discuss Travelers, at this time he also has watched the entire season and as of yet not really heard a bad thing about it. Next week we are going to doing our Stargate Atlantis retrospective complete with the results of the listener favourite episode poll and then we’re back to our coverage of Universe. We hope you tune in for that and as always we would love to hear your thoughts on anything Stargate or the podcast. Oh and apologies for the fun we’ve had with the website thanks to the hacking and the hosting issues, many a post still has broken links thanks to some hijinks with ftp stored images etc.

Stargate SG-1 co-creator Brad Wright’s latest TV mission is taking him to Netflix, and he’s recruited Eric McCormack as captain. TVLine has learned that the streaming giant, in partners…

John is looking forward to a supply visit to an offworld science operation when his jumper is fired upon, he loses power and the ship is drawn into the cargo hold of a huge unknown vessel. John is dragged into a cell and physically abused and questioned but a guard, a woman then enters and it seems they had been planning on capturing a member of a race they had heard were actively attacking the Wraith using the technology of the Ancients. Larrin the commander of the vessel explains that her people live on ships and travel the stars always one step ahead of the Wraith but time and resources are slowing eroding their fleets and she needs someone capable of using Ancient technology because she has found herself an Aurora class starship which needs just a little bit of work. John plays along but when he gets to the bridge and at the command chair he applies a little acceleration without the inertial dampeners throwing the three other crew members into the walls and knocking them unconscious, John activates the hyperdrive and escapes from the traveler fleet but John has to relinquish control when Larrin threatens to turn the radiation shields off but he has sent a message towards Atlantis. Alas it’s the Wraith that finds them first and the ship comes under fire, the two Traveler men are killed when the bridge is destroyed and then John destroys the Wraith cruiser but not before three Wraith board the ship from a dart. There is then a running battle between the two groups and the last Wraith drains almost all the lifeforce out of Larrin, John gets the drop on him and offers him freedom if he brings Larrin back to health, the Wraith does and flees the ship. The Traveler fleet arrives and John is once again in a cell but he offers Larrin an opportunity to work with Atlantis in the future which would benefit her people more than one single ship and when McKay and company come a calling then find John has been left behind with a tale to tell. 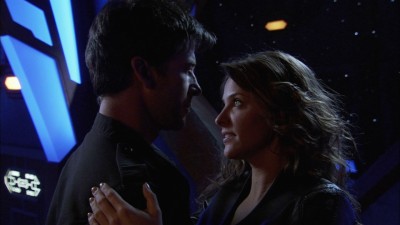 Travelers is an episode which opens up the fourth season by adding a technologically advanced race that thanks to it’s nomadic beliefs has kept itself well under the radar of Atlantis and more importantly the Wraith. Of course as Larrin (played by Jill Wagner) says without the industrial support of a planet based economy their fleets have slowly been reduced in capacity even to the point where whole populations have had to be left on planets. Their find of an Aurora class Ancient warship would not only give them more living space but open up some technology options but without the gene it’s useless hence the capture of someone from the people that are fighting Wraith with Ancient tech. Of course the episode is also an opportunity for Joe to carry the story which he does very well but no question Larrin is his equal in intelligence and guile as well committment to her people, it’s that similarity between the two that allows the resolution of the episode to be fairly positive. Ultimately Travelers is a fun episode and well constructed and as you may know the Traveler culture will play a part in the seasons larger storyline and we will get to see Larrin again so happy days:)

This weeks promo was for Continuing Missions a Star Trek Voyager podcast which will be looking at the novels set within this part of the Trek franchise, the first episode aired a few days ago with a look at the Jeri Taylor novel Mosaic. Next week we are going to be taking a look at the sixth episode of this season of Atlantis “Tabula Rasa” and we are going to be joined by Jeff. As always thanks for the support over on Twitter, Google+ and Facebook and a big thank you to everyone that actually listens to the show and shares the episode information, truly appreciated:)