Jack and Sam return to the SGC after the success against the Death err I mean Anubis and his super starship but Daniel and Jonas are still onboard one a captive and one running loose around the corridors. Meanwhile Tealc is the captive of Yu who seems to be having mental issues but perhaps his First Prime holds the key to the defeat of Anubis, he seems more reasonable and flexible than others of his kind.
Anubis after using his mind probe on Jonas seeks out his homeworld and the battle for Langara and it’s three nations states one of which we came to know well begins, the Naquadria once again holding the key to vast amounts of power for weapons and defence. 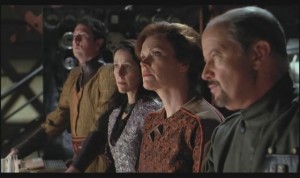 Would you trust them?

Homecoming is a farewell to Jonas Quinn played by Corin Nemec and while he will turn up again the character was written to replace Daniel and now the original is back there is no practical place within the SGC let alone SG1 for him. The double episode opening of season seven does serve to give him a big send off as he fights for his world something which has been a major part of his character all along. Anubis again plays the role of the evil one with panache although his first prime Herak is a bit of a scene stealer but boy him and Jack have great chemistry. 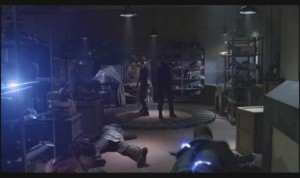 Overall HomeComing is a very good episode although Martin Wood the director said the final farewell scene lacked dome depth, after a year alongside SG1 there should have been more to the goodbye but the limitations of tv runtime and story telling won out.

We had feedback this week from our friend Colin from Trek News & Views as well as a good thread ported over from our Facebook page and Daniel commented on the website. Thanks everyone for keeping in touch despite some technical issues this week and next week we return with the Fragile Balance and two Jacks for the price of one with added aliens:)