Enrico Colantoni reprising his role as Keith Mars in the new Veronica Mars movie, such a pity we never got to see more of his character “Burke” in Stargate SG1.  IMDB

We never got to see Enrico Colantoni return to Stargate as Burke but for those of us who watched him play Keith in Veronica Mars he will be returning:)

The SGC launch a raid on the homeworld of the Super Soldiers and try to dodge the minions of Anubis, they discover the secret of the Kull Warriors creation and perhaps their ultimate weakness. Meanwhile Jack is sanctioned to enter Honduras on a covert mission to rescue Daniel and Bill who are being held for ransom by rebels, complications arise when the artefact is turned on and starts to influence the people around it leading to a possible zombie apocalypse.

Evolution Part 2 continues with the two story threads which were laid out in the first episode of this mid-season two parter. Sam, Teal’c and Bra’tac lead an covert assault on Tartarus thanks to the infilration of the base by Jacob in the armour of the dead Kull soldier. They discover that Anubis either controls a Gou’ald queen or is allied with one and she is producing thousands of symbiotes without the genetic memory. Each one will provide a Kull with strength and healing but without the drive for power and with total obedience to Anubis so the Queen becomes the priority target despite the revelation that Anubis already has a few thousand mature warriors ready to go. 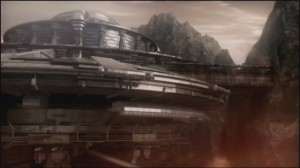 Star Wars, eat your heart out.

In South America Jack has teamed up with Burke a former special forces commrade who now works for the CIA as an agent covering Honduras and Nicaragua, there is bad blood between them but both put aside the past to complete the mission which turns out to be something of a full on fire fight and zombie blood fest. It seems the alien device which was the basis of the fountain of youth not only causes mild megalomania in humans but also like a sarcophagus brings life back to the dead. 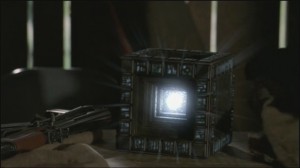 Jack and Burke have very good chemistry although Burke is played very light weight and cheerful almost a little crazy which balances out the distrust and anger he has towards Jack, the situations the two find themselves in provides plenty of scope for both humour and all out action. As with a few earlier episodes the short supply of P90 brass casings limits the onscreen firing of the weapon by Jack but there are still plenty of AK-47 and Shotgun rounds on the market. Daniel and Bill as before work well together although a lot less screen time in the second episode and a strange choice to leave Bill totally out of the final scene making us question if they forgot him and he is still walking around the jungle. Jacob rocks it in the Super Soldier (Kull Warrior) armour despite Dan Payne doing the acutal full armour peformance (height and build etc). Bra’tac is as always wise and competent and keeps putting the youngsters in their place and they certainly needed his skills as they fight their way out of the facility and make their escape in a cargo ship. 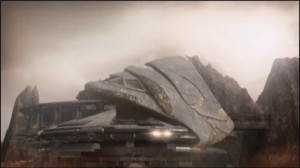 Evolution Part 2 is certainly not the end to the Super Soldier story in fact it’s just the beginning as Anubis extends his grasp on the galaxy and looks to exploit the power he now has thanks to the pillaging of the Asgard technology via Thor and Jonas, the action and aminious threats soon mount up.

This weeks promo is from British Invaders a show which talks about classic and contempary British genre television, well worth a listen. As always thanks for the feedback via and next week we will be watching and discussing the episode “Grace” a Sam Carter centric tale set aboard the Prometheus.

During the next week we should be moving to the new home of The Gatecast so keep your eyes peeled.