The members of SG1 are stuck 5000 years in the past but in this alternate timeline dorky Daniel and Sam after helping to discover the location of the second gate are put onto the expedition thanks to Jack returning to the military which in turn is thanks to Major Kawalsky his long time friend and compatriot. The use the jumper to travel to Chulak in search of Tealc who they believe will be open to helping them but on arrival they are captured by the Jaffa of Apophis and Daniel is take for interrogation and then when they escape he reveals that his no longer the Daniel we knew for such a short space of time. In a clever tactic they take the jumper 5000 years into the past of Chulak and use the gate to travel to Earth and they appear shortly after the original SG1 arrived but find that well they did not fare very well. Only Daniel survived which means once again we have a full compliment of SG1 to rally the natives to rebel and over throw Ra but this time to use the Jumper and it’s cloak to secure the gate and make sure it will be discovered under the cover stones 5 millennia later. A blink of an eye later here is a SG1 watching the video of themselves recovered from a dig site and well everything seems to have worked out so lets all go fishing and they do including Sam but there shouldn’t be any fish in this pond…

Moebius Part 2 is a fantastic season finale and watch together the two parter is brilliant time travel science fiction. It was great to see “evil” Teal’c once again as the First Prime to a snazzy looking Apophis played by Peter Williams who refused to cut his hair hence the use of the fancy hat. We lost Daniel and gained Daniel and lost Teal’c, Sam and Jack but hey we are back to a full compliment of SG1, come on don’t you love time travel tales:) 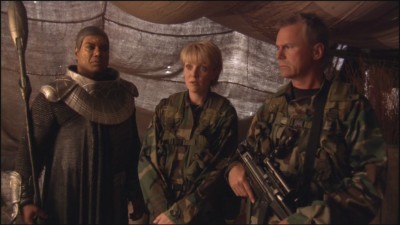 The episode has for the most part stunning levels of location shots, composite scenes and set pieces although one or two shots were a little sub-standard as Peter commented on in the episode commentary, budget and practical limits played a part but next season a full size location jumper will solve many of these mainly for Atlantis.

As a season finale the episode was awesome and a lot of the credit goes to the final fishing scene and slow pull back across the pond and we’ve seen that shot before but it doesn’t matter it works so well. If this had been the series finale it would have worked just as well, the story and conclusion providing a fitting end to SG1 and passing the torch full time to Atlantis. 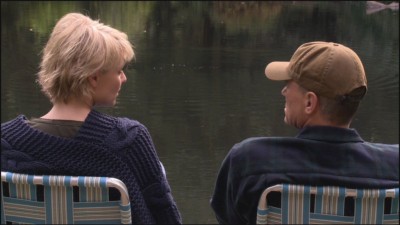 As it should be

Once again we have to thank Scott and Miles for joining us in the recording of this show, they were excellent and with fewer audio issues the final result was more to my liking. We may have to try to convince them to make another appearance some time in the future:)

Next week we take a leap at the Stargate Atlantis season 1 finale “The Siege Part 1” with Jeff from the states joining us for that recording, hope you can join us and maybe leave a comment, review or any sort of feedback I can’t tell you how much it means to us. Thanks to Brad for posting his mini-feature on Gatecast 106 “Menace” over on the Facebook Group and thanks to everyone that we interact with us on twitter and Stephen for the email:)