Anubis has made his intentions known to the SGC and they are desperately looking for options to defeat the use of his energy based wormhole weapon, meanwhile Tealc and company are engaging the enemy on his own soil not knowing if it’s already too late to save the SGC and their friends.

The conclusion to the season opener two parter is every bit as good as the first, expansive lineup of guest actors, excellent CGI and lots and lots of action. We see Teal’c, Bra’tac and young Rya’c showing us what special forces Jaffa are truly capable of which makes you wonder once again if the arrogance of the generic system lord blinds them to what a powerful and precise weapon they had. Too many times we’ve seen old style line ’em up and rush the enemy tactics employed which with throw away troops is maybe not too much of an issue but when you see these three kicking ass then run for the hills. 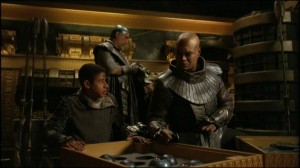 What is also evident once again is that Anubis himself seems to set a standard for his Jackal tattooed Jaffa which is much higher than that of other System Lords, his men seem more intelligent and capable but of course for purposes of the show our heroes have to keep surviving but we can get them into some dire straits at times:) 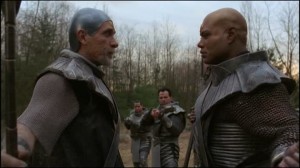 The natives are not friendly!

Once again it was great to see the early days of the Rodney McKay we came to know and love, his interactions with authority and the few people who were his peers ( he may refuse to admit that) is always fun to watch and of course this is where Jonas finally gets his chance.

Next week we’ll be watching and discussing episode 3 of the season “Descent”.