The Daedalus is undertaking a mission to oversee the testing of the Intergalactic Gate Bridge that is designed to use a series of stargates to cross the huge void between the Milky Way and Pegasus galaxies with a human built space station at its midpoint. They detect fast moving vessel in normal space heading towards the Milky Way and with some careful flying they make contact with the alien ship which is travelling at almost the speed of light, it slows and it turns out to an Aurora class warship called the Tria. When they arrive back at Atlantis the captain of the Tria and some of her crew beam down and after some pleasantries they take control of the city and pretty much kick the humans out but in a polite way. Woolsey is allowed to stay and act as a representative in the long term hope of allowing humans to return but in the mean time the Asurans are advancing on the city but the Lanteans are confident they will not attack due to the programming preventing action being taken against their creators but oops that was a mistake. 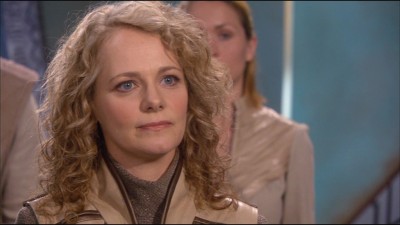 When the Asurans attack General O’Neill who is currently on Atlantis negotiating alongside Woolsey is trapped and despite the standing orders not to attempt a rescue Sheppard, Weir, Carson and Rodney steal a puddle jumper and use the Bridge macro to traverse the huge distance between the galaxies but pop out at the world where Teyla and Ronon are resident. Together they plan a very risky assault on Atlantis and after the initial attack they gain the support of Jack and Woolsey from within the city and the battle is on with the replicators, will they liberate the city before the star drive can be repaired and Atlantis flown back to the Asuran homeworld.

The Return was the mid season two parter and worked very well indeed, lots of drama, tension and action and thankfully we didn’t have to wait months between the two parts. It was great to have Richard Dean Anderson fully involved in Stargate and it was fun to see him work alongside Robert Picardo, the two of them were excellent together with the bickering and dry humour which only Jack really delivers well. It was a little surprising how quickly we once again lost access to Ancients (aka Lanteans) but once again their arrogance was their downfall but as we see throughout the franchise it’s a trait that hampers humans as well.

Many thanks to Miles for joining us for these two episodes, we had some technical issues which affected the recording but it didn’t turn out to bad. Miles is one of the hosts of the Scifi Diner Podcast which we’ve sourced quite a few interviews from, check the show out you’ll enjoy it:) Since this is rather long episode of Gatecast I’ve saved a bit of feedback from Brad for next week but we’d love to hear what you thought of our recent bonus shows and our look at The Return. Next week we’ll be back with SG1 and the episode Line In The Sand, hope you join us.