SG11 are prospecting on an abandoned Goauld world for Naquadah deposits and after a month of trouble free endeavours one of the airmen is taken by an alien/creature and strung up dead. SG1 are sent to investigate and provide military support for the expedition and Daniel sees artefacts that indicate that Unas were once used as slaves on this world and indeed the survivors of the mining camps have prospred since the Goauld left the planet.

Enemy Mine is a vehicle for the of the Unas and by extension Chaka the being that Daniel befriended and shared a few adventures. Faced with the desperate need for the Naquadah the US military are prepared to kill and relocate the “animals” but Daniel convinces them to try negotiation and with Jacks support they return to the planet with a new sense of purpose. 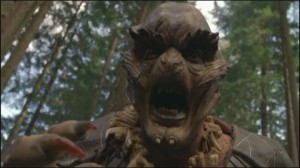 The episode makes excellent use of the oft used gravel pit and forest locations around Vancouver, they really do add a sense of scale to the episode and makes it believable that dozens of Unas clans could be in the region but unseen. Michael Rooker who plays Colonel Edwards doesn’t have a lot to work with but he is a true professional and balances the negative aspects and positive outcome of his meeting with the Unas and SG1.
As always the prosthetics for the Unas are excellent and while we have Chaka played by Patrick Currie rather than Dion Johnstone he carries on with this remarkable creation capably aided by Alex Zahara as Iron Shirt. 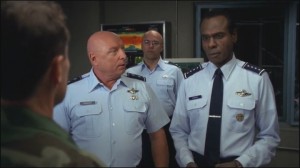 Enemy Mine is a rather slow moving episode despite an out and out fire fight between SG11 and a clan of Unas which was wonderfully done, vicious and violent without the gore. It also aided the observation into the motivations of the Unas which was eventually revealed by Daniel who had some excellent scenes but communications without a common language is very tricky in scifi hence universal translaters, translator microbes, Babel fish etc etc.
I consider the episode a fairly average viewing experience but one that is very high in terms of production, no one fell short in delivering in their field. 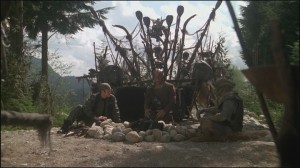 Thanks for the feedback this week and comments about other aspects of the show on twitter, facebook and google+. The promo this week is from Hexed: Sisterhood of the Supernatural a tv centric show hosted by Suzie & Shannon.
Promo…

On a routine mission SG1 witness a firefight between what looks like a SG team and a Jaffa contingent, unsure who the SG team they decide to intervene but get more than they bargained for and uncover a long term plan put into place by a system lord.

This is a split shoot between the standing set and location (yeah trees are involved) but they do get their monies worth out of some pretty basic setups and it’s curious that we see better military tactics from SGX then we do many times for the genuine SG teams. 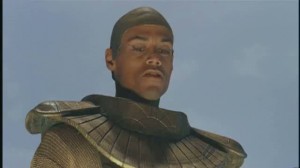 This episode does provide continuity sources in as far as the Intar weapon features in a future episode and two of the actors (Aaron Craven & Dion Johnstone) go onto other roles within the franchise.