Two escape pods are found in orbit around a distant planet and upon return to Atlantis the first is found to include a very old woman whose life is maintained purely by the pods machinery. If she is removed then she will die but as Weir approaches the pod she is struck by a beam of energy and the conciousness of the woman is transferred to her, this is believed to act as a last ditch method of allowing the survivor to communicate and say goodbye or offer insight into what ever disaster befell the mother ship. Weir seems to be all up for helping the woman who says the other pod probably contains her husband and John agrees to host the males spirit. Things do not go according to plan, the two now with healthy bodies with the knowledge of their hosts attack the guards, take their weapons and begin a cat and mouse game around the city intent on killing the other, they are the two final survivors of a culture that has ripped itself apart and with only hours to live just being the last one alive would be considered the victory.

The Long Goodbye has it’s story elements born within many scifi stories and series so there is nothing new but as always it’s how it’s done for each incarnation. In the Atlantis version we have some excellent space CGI, the pods look very nice and as a practical prop acceptable. The two aliens motivations while ridiculous at least have the desperate and illogical sense that we alas do see in the most obsessive people in real life who ignore ethics and morality to achieve a goal, this is normally a bad thing and the same is seen here, both aliens push the boundaries caring little for their hosts. The real upside of this episode is once again when Torri gets a meaty script she really gets her teeth into it and while Joe works his acting muscles it’s Torri that steals the scenes with everyone although it has to be said McKay and Caldwell have great abrasive chemistry. It’s only after the fact you realise that this is a bottle show, existing sets and cast with a little it of new CGI to set everything up and then you let the stunt crew and writers go to town.

Weir and Sheppard having fun.

We had some feedback this week over on Facebook and Google+ and as always Twitter pays us back big time with lots of Stargate and scifi chatter. This weeks promo is for The Podcasting Gear show hosted by Scott who also does the SciFi Diner Podcast and next week we are joined by Stephen for the SG1 episode Scourge, it’s been a few years since he joined us for an episode so it’s a welcome return. We hope you enjoyed our look at The Long Goodbye and feel free to let us know what you think about that episode and anything Gatecast or Stargate. 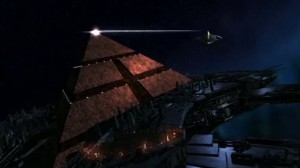 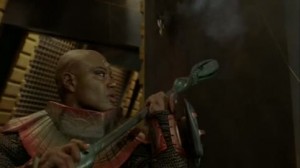