After another very successful raid against the Lucian Alliance their leader Netan places a bounty on SG1 and thanks to them being tagged during the last raid the galaxies premiere bounty hunters are on their way to Earth to collect. Cameron along with Vala are going to his high school reunion, Daniel is deep in some research at a public library, Teal’c is offworld dealing with some Jaffa issues and Sam is attending a technology conference to demonstrate some of the tech she is “working” on. Meanwhile back in Kansas Vala is making quite the impression on John’s parents and to be honest I think she has been accepted by the mother who maybe sees a bit of a kindred spirit but Cameron is dealing with an old crush and a friend who it seems is more than happy to stir things up a bit. 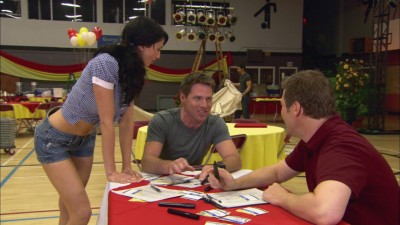 Bounty is again a pretty much standalone episode even though the Lucian Alliance and Netan storyline has been active this season but background to that isn’t required to enjoy this story, we get the whole team having their own little adventures and dealing with the bounty hunters who come for them and eventually the big showdown at Cameron’s high school brings them all together. I think it’s safe to say never have so many NDA’s been issues at one time although no doubt in high school tradition they could get away with saying the punch was spiked even though there surely would have been a licensed bar. Either way there is a lot of fun to be had with the episode, Daniel ducking a femme fatale and Teal’c and Sam a more brute force approach to collecting a bounty but the rise of Odai Ventrell played by Mike Dopud brings the action into focus and we get the unexpected resolution, no doubt a character who may have returned if there had been an eleventh season Mike does return to the franchise in Stargate Universe and a guest spot on Atlantis. It was fun imagining Peter DeLuise has he directed his wife Anne Marie playing Amy Vandenberg to lay a smacker on Cameron and it’s easy to imagine Vala interrupting them had more of a meaning:)

Overall Bounty is an excellent episode, lots of action and humour but as we are coming to the end of SG1 you wonder if more time should have been given over to the ORI resolution and fall out but at this point given we did the movie we can’t complain about the writers and cast getting to have some fun. This weeks promo is for the Dune Saga Podcast and next week we are going to be taking a look at the Atlantis episode The Game, hope you join us.

A visit to the world of Volia (P3A-194) gives SG1 the opportunity to meet a highly advanced race known as the Aschen who control a confederation of worlds who share resources and technology and are very open to having Earth involved. Thanks to the vagaries of time travel/alternate reality the SGC are unaware that they have had dealings with the Aschen before and the cost of dealing with a race who were manipulating the Earth into ultimately culling 99% of her population. Overjoyed with the prospect of gaining access to weapons and defence technologies plus medical tech in exchange for our gate databases and experience there is not a descenting voice but caution first and once the layers are peeled back things begin not to make complete sense. 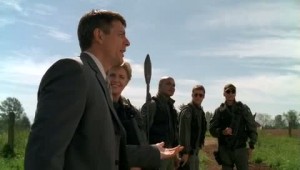 2001 is the sequel of sorts to the earlier 2010 although I guess again with time travel it may be the prequel but either way once again the expansion of existing characters and situations pays off and we get an interesting and fun episode with humour, some angst and fun bad dudes who themselves do a passable Laurel & Hardy:)

In many ways the Aschen show us what is possible when you think long term and have a decided technological advantage over another people. The cause of the “plague” which wrecked the Volian people is left cloudy but from what we know of the Aschen it’s not unlikely they seeded the world and then came to the rescue, you have to be impressed because without losing a single Aschen life they eventually took over a world and turned it into a bad basket to feed their own people not the few thousand farmers left on the planet. 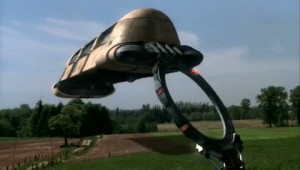 Feed the world, well not this one…

It was good to have Joseph Flaxon return to the show as the character when married to Sam in 2010 seemed to have been doing all the right things as a partner (allowing for the global conspiracy of silence) and we see the chemistry straight away. Surprisingly it’s also obvious that he gets on well with Jack who is not always welcoming to people fostered onto him let alone someone who take a shine to Sam but I guess the face Sam seemed to like him tempered Jack’s interaction. Mind you Jack once again was the first to voice doubts over the prospect of an alliance and it didn’t help that Kinsey got himself involved and Jack tends to oppose anything that Kinsey supports. 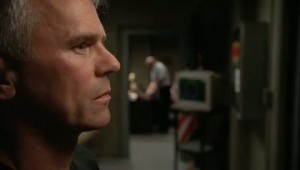 That’s the Jack you don’t mess with.