Rodney is talking to his sister Jeannie via email and picking her brain to solve a nanite issue involving a medical application and when she is kidnapped he returns to Earth along with John and Ronon to aid the NID and SGC in the search. It soon becomes evident that she was taken due to the interception of the email correspondence and then Rodney himself is kidnapped with Agent Barrett left unconscious in a parking lot. Henry Wallace the owner of  Devlin Medical Technologies who have been getting access to alien tech via their defence contracts has been searching for a cure for his daughter (Sharon) and having discovered the potential of the nanites has gone to an extreme length to give her a chance for life. Rodney and Jeannie are promised their freedom if they help and eventually Sharon awakes fully healed but soon after collapses again as the nanites still poorly coded begin to fix everything regardless of the consequences. She is left in a vegetative state after the nanites turn her heart off and starve her brain and she eventually passes away but Jeannie has the nanites in her as well and it’s at that point they are rescued but no one on Earth has the knowledge to fix the nanites before they kill her as well. 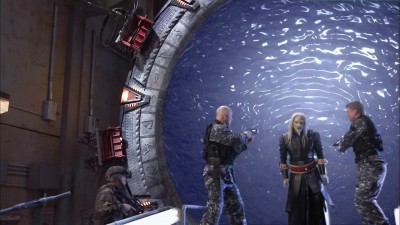 It’s decided that only Todd who has worked with the Replicator code in the past could offer a solution and eventually he agrees to help but he soon collapses as he has not fed for some time. John approaches Henry and simply lays out his options and the still remaining consequences of his actions, Henry sees some redemption in helping to save Jeannie and soon after an “accident” occurs in the lab allowing the wraith to feed and then the work on the code is finished. The nanites in Jeannie are deactivated and Rodney has a heart to heart with his sister and then with John, it’s all worked out ok even with the tragic choices made by a desperate father.

Miller’s Crossing brings Jeannie (Kate Hewlett) back to the show and while the chemistry between the siblings is evident it’s now used to drive a much more darker and disturbing storyline. It’s understandable the actions that Henry Wallace takes, he has the knowledge and resources to offer his child a chance of life and he is going to take it and I believe he would have honoured his promise to release Rodney and Jeannie and turned himself in if honest effort and hopefully success had been achieved. No plan ever goes smoothly and his desperate move to infect Jeannie may have brought some positives that pretty much in story terms meant he could not get out of this with a win, in this case both he and his daughter died albeit the former in an act of redemption which I think we can honour. It’s disappointing that the writers didn’t consider taking John down a deeper path since they felt he was struggling with the decisions he made in regards to Wallace but I guess Atlantis wasn’t that type of show.

We’ve got to thank Andrew for joining is this week for an episode he requested, as always we have to juggle the time to suit three people in three timezones but we got it done with the minimum of fuss and in that respect if you want to join us for an episode please get in touch. The same goes for any feedback on Stargate and our own coverage of the episodes.

This weeks promo is for the Flash Pulp podcast who offer up original audio stories and discussion with a modern “pulp” theme, two or more shows each week so check them out. Next week we are going to be watching This Mortal Coil which was the mid-season finale for the fourth season, hope you join us for that and keep watching Stargate 🙂

Jeannie Miller aka Jeannie McKay has an epiphany while playing with her daughter, with a background in maths and physics she creates a theory to explain the process of bridging universes / realities and with the encouragement of her husband (Kaleb) sends it off for oversight and it comes to the attention of Stargate Command and Sam Carter who knows they could solve the problem of energy generation a problem Rodney McKay had been working on. Despite a four year estrangement Rodney goes to visit his sister and the only way to convince her to help is to beam her aboard the Daedalus and prove to her there is a benefit in spending time away from her family and Kaleb agrees so off to Atlantis they go. On arrival Zelenka has built the prototype machine thanks to the information being sent to the city from the ship and once activated it all seems to be working fine until late one evening the energy spikes a man appears inside the chamber who looks remarkably like Rodney. 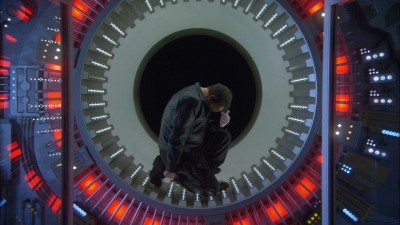 It turns out that although it was a slim chance they have broken through to a populated universe and the exotic particles being generated as a by product of this “bridge” will tear that realm apart, they agree to turn it off but it turns out it won’t be that easy as the threat to both universes builds when the other side takes pro-active action, the solution is to use a massive amount of energy to disrupt the bridge which could mean depleting the ZPM but it has to be done and maybe at the last second “Rod” will be able to return to his world.

McKay and Mrs Miller is a very good episode of Atlantis, it makes full use of the guest appearances from within the Stargate family as well as bringing in Kate Hewlett to play Jeannie, Kate is David’s real life sister so the chemistry between them on screen was perfection, you could almost believe the reconciliation the two characters go through was part of their real lives. Kaleb played by Brendan Gall was good character, patience of a saint when dealing with his wife’s family and their daughter played by Madison Bell was too cute to mention:) The beauty of this episode of course is the production side in giving us two David Hewlett’s on screen at the same time using a number of different techniques, David then went to town bringing to life “Rod” his alternate self and developing a whole new social dynamic within Atlantis and the rest of the cast can be credited for seamlessly playing off both characters so well, kudos to Martin Gero for such a great script.

Many thanks to Shayne for joining us this week, another guest from Australia which required the usual hoop jumping to get three global time zones to sync and make the recording not just possible but practical:)

We got some feedback for last weeks episode but I finished the edit early this week so I include it next week but as always a great time is had over on twitter and the Stargate community we are part of, so much fun and creativity being shared with the only thing lacking is more direct feedback for our show, we’d certainly love to hear from you so don’t be shy, contact forms and social media options are just a click away. This weeks featured promo was for Nutty Bites a geek friendly podcast hosted by Nuchtchas with some of her friends discussing topics that cover all manner of things we love, give her show a go. Next week we will be taking a look at the Stargate SG1 episode Company of Thieves with a first time guest, stayed tuned.