Life without Daniel is tough on SG1, while Sam deals with the loss aimlessly walking around Daniels old lab an unexpected visitor arrives and in time honoured fashion circumvents all the safe guards in place to protect the SGC. Yes Freya from the Asgard is paying them a visit with news that Thor has been killed by the Goauld but assistance is required to protect a secret lab on the planet Thor had been protecting and it’s vital to the Asgard. Jack jumps at the chance knowing that the best way to get over the loss of Daniel is to throw themselves back into the job so off they go in a captured cargo ship and on arrival are ringed into the secret lab. It’s there the experiment into the genetic manipulation of the Asgard race is being done by Heimdall a younger Asgard and a 100% CGI creation which allows some wonderful shots to be produced for this episode. The tension escalates when Anubis arrives to take over the interrogation from Osiris of the captured Asgard while SG1 put together a rescue plan whilst knowing they will eventually be discovered. 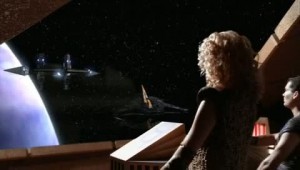 Revelations the season 5 finale is epic on many counts, the first win for the Goa’uld against the Asgard in open battle must send shockwaves through both camps for different reasons and the loss of Thor even more so but even worse Anubis captures Thor and is able to pretty much drain the knowledge out of his brain opening up even more possibilities. The CGI in this episode from the wonderful Heimdall (Voiced by Teryl Rothery) to the beautiful starships in orbit around the planet is top notch and the skill required to merge CGI and live action in the lab is a major achievement on a TV budget, there are truly some beautiful and clever shots.

In hindsight the lack of an uber cliffhanger makes a lot of sense as the show was leaving Showtime and moving to the Scifi channel (as it was then) and while at times show runners/studios seem to delight in sticking it to their fans this time Showtime viewers got a good send off. I’m not sure in this day and age if a show moved then they wouldn’t try to maximise the impact of a finale but they would certainly not miss the opportunity to make sure the viewers knew a former much loved character always had a chance to return. 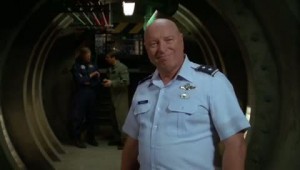 Everything will be just fine, trust me:)

Perhaps there are some things you should not tamper with without the complete specs or instruction manuals but the lack there of does not stop the SGC from over riding lock out protocols on the gate and dialing. The results don’t seem too bad until minutes after arriving on Ktau the sun turns red casting the world into shadow and pretty much heralding the end times to the inhabitants who honour the Asgard created mythology.

Red Sky is a standalone episode which draws on the existing canon in regards to the gate system and the Asgard and certainly echos the season 1 episode “Thors Hammer” which is never a bad thing. We get to meet some more of Thor’s people and the Asgard puppets are getting really good with some top notch facial expressions most of which anyone who talks to Jack for any length of time would recognise. 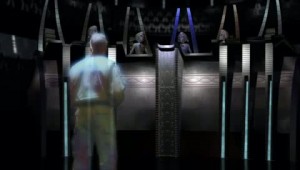