The Stargate activates and an old and void IDC code is received, it used to belong to Sam Carter who is obviously mystified but things become a little clearer when the MALP reveals a human form replicator at the other end of the wormhole and she was created in Sam’s image. She requests death at the hands of the SGC using the Asgard/Ancient created weapon but with such a valuable resource within reach Jack with a lot of prompting from Sam agrees to let her interrogate the replicator in the hopes of ultimately defeating this menace to the galaxy. 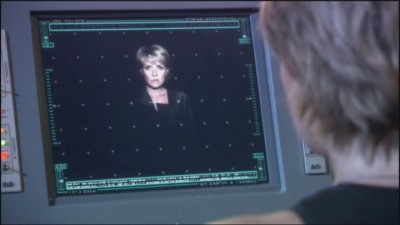 Damn, always wanted to be a Ginger.

Gemini is from a production point of view a highlight of the season, some excellent camera and post-production work to get Amanda looking right when there are two of her on screen using a variety of techniques to make it work. Her own performance is outstanding as well providing two sides to the Sam Carter personality as is the subtle makeup which certainly sets the two women apart. Teal’c has a strong role in this story as well being the counter to Sam’s headlong rush and total belief in repli-carters word, of course knowing oneself makes it easier to deceive by providing all the right answers even to questions not directly asked.
It all goes pear shaped of course more so for the put upon Fifth whose only really two “relationships” both turn around a bite him, few men or man like beings get shafted twice by Sam Carter. 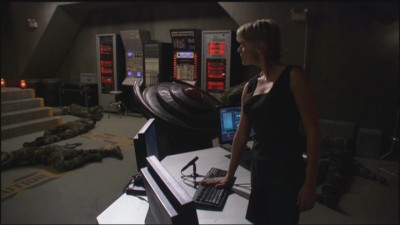 We were joined by Brad for this episode, he was up in the wee hours to record with us in our late afternoon, huge appreciation and once again we are always looking for a guest on the show, it works better with three voices at least I think it does.
This weeks promo is from The Saturday B Movie Reel a podcast which reviews and chats about the scifi/creature and disaster features which turn up so often on the Syfy channel, lots of fun if like me you love these sorts of movies:)
We’d love to hear from you so please get in touch, we can be found well here, on Facebook, Google +, Twitter, Stitcher and of course itunes which if you would like to leave us a rating/review would be most appreciated.
Next week we are going to discuss the Stargate Atlantis episode The Defiant One, please join us and spread the word.

Congratulations to Robert Carlyle for winning the Gemini Award for Best Performance by an Actor in a Continuing Leading Dramatic Role for his work in the first season episode “Human”.

Alas despite SGU having another 8 nominations for both behind and infront of the camera work Robert was the only winner but he certainly deserves it having made the decision to move from theatrical to tv with a role that suited his style to perfection.