First contact is made with the people of Pangar a society that is technology wise a few decades behind the Earth but with a stable culture albeit not exactly a fair and just one. SG1 as representatives of the Earth pay them a visit and are offered access to a drug (Tretonin) which the Pangarian people use to combat all forms of disease with almost god like success and in return they ask for training and information on gate travel, granted access to Goauld worlds is their goal but even that makes some sense based on their as yet undisclosed circumstance. It’s always nice to see airships in alien cultures even those that may be advanced enough to have moved passed that solution to air travel. 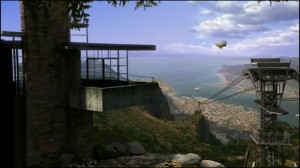 Jack is at his diplomatic best as he tries to point out the “stupidity” of these people going to any of the Goa’uld homeworlds whilst Jonas and Teal’c investigate the ruins which provided these people with their Stargate lore. It’s here the discovery is made which reveals the secret Pangar is hiding and opens up a whole new can of worms and brings the Tok’ra into the mix. Cure is pretty much a standalone episode but is vital for two reasons, the first is the importance to the long running Tok’ra storyline and the second to the future of the series which becomes more apparant as we go along:) 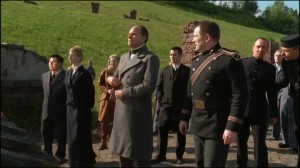 As always there is some very nice location work and for once it didn’t look like it was raining, the guest stars and their characters were well suited to the story and while overall the episode was nothing special it’s well worth repeated viewings especially in light of what comes later in the series. 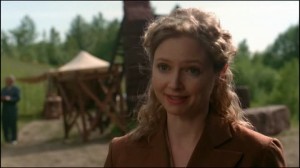 I’ve got a secret

This weeks promo is from Pulp Audio Weekly and we’ll be covering “Prometheus” next week so any all feedback is appreciated and if anyone fancies joining us for an episode drop us a line.