Senator Kinsey is the target for assassination and the shooter is identified as Jack O’Neill a trained sniper and who bares a well known grudge against the politician, there is also the small fact of video footage of the Colonel in the vicinity. Jack is put under arrest and it’s upto the rest of SG1 with input from the NID to investigate and discover how and why the Senator was targeted and it’s not as obvious a reason as we may have expected. 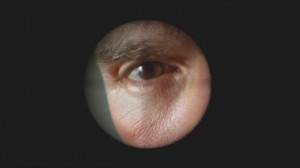 Smoke and Mirrors is an interesting episode which brings to head a number of plot elements and sheds light on some of the manoeuvring which has been going on behind the scenes which have been the root of the spate of NID rogue actions. The actual reasoning behind these events does come as a surprise given how we’ve had to deal with the political aspect of the SGC and elected officials but it does make a lot of sense, that’s important to sell the show as something beyond simple scifi. 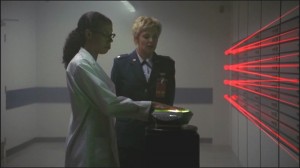 One thing this episode does have is quite a bit of humour as once again Jonas and Teal’c buddy up and go investigating, the two characters work well together and while you wouldn’t think it would work it does. The combination of Sam with Agent Barrett also comes across well leading to the character being used again as the main NID middle man and the mechanism to make this story work is a call back to Foothold, that method of story telling is a favourite of ours. 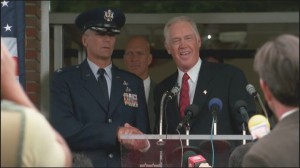 The Tokra are attacked and take refuge at the Alpha site unaware of the large group of rebel Jaffa  are based there themselves refuges from an attack on their world. Almost immediately conflict arises and suspicions aired and then despite the deaths from the attack a Tokra is murdered and a Jaffa suspected but complications arise when that Jaffa is then found murdered.
Has the Alpha site been infiltrated by a Goauld or are the SGC simply dealing with the millenia old greivances that are being brought to the surface by such close proximity? 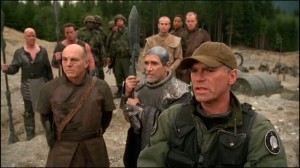 Nothing to see here.

This is the first look at this Alpha site and the first episode in which both Bra’tac and Jacob come face to face, two excellent characters and actors who have graced the series with their presence over the last few years. An interesing titbit is that the majority of the extras in Allegiance were also featured in the early episode “Warrior” whose Jaffa rebels were driven from their home to the Alpha Site, a nice touch. 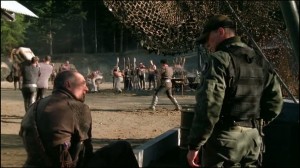 The gym must have been full

Alligeance is an ok episode, it works more due to it’s production value (Location, stunt work and guest stars) then as an overall story but it is more than the sum of it’s parts and adds a lot of depth to the relationship between the two shaky allies and the humans who stand between them. It also has RDA shooting a really big gun in slow-mo so props to the steadicam operator. 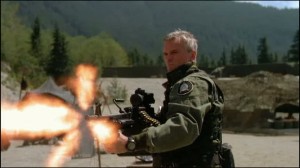 Say hello to my little friend