Dr Fraisers adopted daughter the “alien” Cassandra is celebrating her birthday but has adapted to human female teen traits and wants to spend more time with her friends and her fella. That special kiss on the front porch however goes awry and she ends up unconscious along with exploding light bulbs, mighty fine kisser that boy will become. Anyhow back at the SGC the team explore the possibility that her planet holds the key and they do indeed find a mysterious and hidden lab in the forest which leads to a discovery that becomes a minor part of the mythology of the Goauld. 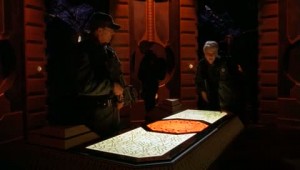 It’s always tricky to have a teenager in this type of show and balance an interesting character with all the stereotypes you may expect from such a person and they just about pull it off. The big plus point for this episode is the callback of Cassie and her continued life with Janet so that strengthens the appeal of the Doctor as a series regular. The second benefit is to tie together another System Lords antics with the long term goals of the SGC which opens up more extensions to this storyline, always a good thing.

All in all Rite Of Passage is a fairly good episode, it lacks a little in the script department and has a lot of scenes which rely purely on the onscreen action (or even lack thereof) with just the soundtrack but it did go by quickly which speaks volumes. 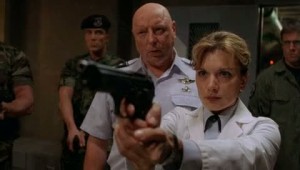 That’s a big one!