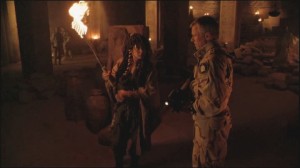 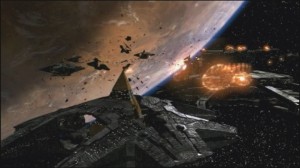 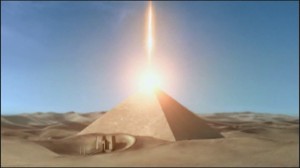 Daniel as promised returns to Abydos one year after he left to give word on his search to Kasuf and is rather surprised to discover who he is waiting for him. Meanwhile back on Earth Jack and Sam are in Washington to receive the Air Medal for their part in thwarting the Goauld invasion and Jack meets a reporter who has intimate knowledge of the SGC programme and Sam learns of her fathers illness.

This episode is pretty much a double A storyline with both elements being pivotal in the overall arc of the series. Daniel and Tealc on Abydos deal with Sharae/Amaunet and her child along with Apophis and Heruur while the conspiracy and secrecy of the SGC and the lengths people will go to protect them are explored by Jack. The terminal illness of Jacob Carter (Carmen Argenziano) opens up possibilities in future episodes which pan out very well indeed.

Secrets is an excellent episode and only perhaps after the fact do you realise how much groundwork is being laid down for future episodes/seasons. We get the return of Kasuf who was in the theatrical movie and Sharae who has been MIA since the series pilot along with a new human character and the increased impact of another system lord.