This weeks on Gatecast we have another bonus episode and the show will be a little longer than normal as the feature is a full length movie namely A Dog’s Breakfast. The movie was directed by David Hewlett and written by David and his wife Jane Loughman and was made in 2006 and after numerous festival screenings and huge fan support it securing a distribution deal and was released via streaming, vod and dvd within a number of markets. A Dog’s Breakfast was a project intended to fill the gap during the hiatus of producing Stargate Atlantis and in that regard they were able to secure a significant amount of hardware and talent not to mention roping in friends to make the movie come to life both in front and behind the camera. Kate Hewlett (Marilyn) stars with David as one third of the main cast with Paul McGillion (Ryan) as the final part of the trilogic in this kinda old school British domestic farce, additional support is given by Christopher Judge and Rachel Luttrell and lets not forget Mars the pooch who causes so much mischief in the movie.

I’m not going to go into too many plot details although we hope you’ve all seen the movie so lets just say any fan of the Stargate franchise should seek it out, it’s currently on DVD (R1 & R2) as well as various streaming options and hand on heart it is a very funny movie. David did actually write a script for the series ( Star Crossed ) shown within the movie and that would have been interesting as a Galaxy Quest type look at a scifi series as it was being made and shown but nothing came of it. We have yet to see a sequel although the movie may have been a little ahead of it’s time in terms of exploiting the fanbase and online options, it’s going to be interesting to see how Debug the Hewlett’s latest movie project fares if a widespread theatrical release isn’t on the cards. 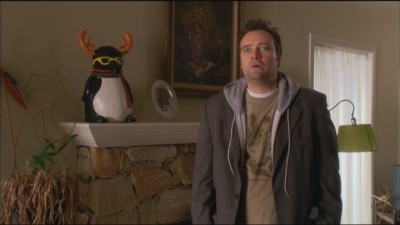 David is the one on the right

Next weeks show will be another bonus episode (third of four) and it’s going to be the Andromeda episode “Day of Judgement, Day of Wrath” a third season episode which features Michael Shanks and Christopher Judge alongside the regular cast such as Lexa Doig. Brad will be helping us out with the show as Alan was in the process of moving to Finland so we hope you join us for that. So with christmas behind we wish everyone a happy new year and enjoy the last episode of Gatecast released in 2013.