Welcome to the wrap up show for the eighth season of Stargate SG1.
We didn’t get a third voice for this show so we both did our best and thanks to Brad for sending in some audio comments about the episodes which I spliced in through out the show.
It’s been a good season for SG1 with some very strong episodes particularly the second half of the season and that may have been the result in the belief they were wrapping up the show with the option of an unrealised Stargate Command series as another spin off. What ever happened or didn’t we are left with some stunning episodes both in terms of drama, action and humour with an ever increasing style and production value to the show despite tighter shooting schedules and budget restraints. 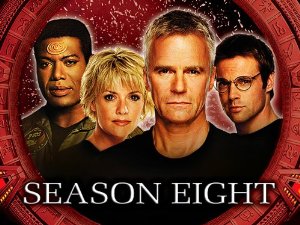 Many thanks to everyone who voted in the poll and making it our highest turn out which
was most rewarding.
Next week we will be doing the Stargate Atlantis wrap up show and Brad joins us for that
and then we’ll be looking towards SG1 season 9 and SGA season 2, the journey never ends:)