Daniel was captured by Adria and now makes his return to the galaxy but he has been converted to a Prior of the ORI and is preaching Origin to a small community, SG1 are aware of this new non violent approach to gathering new worshippers but they are shocked to see that it is Daniel who is leading this new wave of spreading the gospel. They act quickly and beam him onto the Odyssey and immediately stun him and with the anti-prior device and begin to question him about his time with Adria and what exactly are his plans given only he has the specs to the device Merlin created to fight the ORI. Daniel claims this is all part of his plan and by convincing Adria that he has embraced Origin she would indeed change him into a Prior and the abilities that would give him would in turn be used to build and deliver Merlin’s weapon into the ORI galaxy but with the whole Milky Way at stake the SGC and the IOA are sceptical to say the least. A compromise is given with Daniel giving the location of the ORI starship and SG1 launch a raid to capture the weapon and finish it’s construction but as they battle for their lives it’s Daniel who escapes, kidnaps Jack, steals the Odyssey and rushes to meet up with Adria and the final act of his plan. 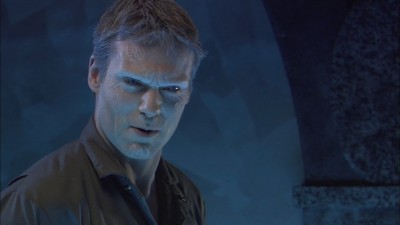 You can trust this face.

The Shroud is an excellent episode of Stargate SG1 with it’s action and drama all tied together with a number of what are talking head scenes but that’s all great character interaction and dialogue, if nothing else Richard Dean Anderson’s final episode of SG1 pays off big time as we get the old Daniel and Jack dynamic back as if the previous two years absence had never happened. In many ways it’s a gift to the fans, each member of SG1 at least those that spent most of the time with Daniel get to well interrogate and come to their own conclusions and while it seems very much like Daniel is Daniel the powers that be have certainly left enough of a hint that there is more going on. Of course as it turns out Daniel was not providing the whole story and we got the WTF moment when he finally met up again with Adria who then not quite got what she was expecting. The final scenes with the incursion of multiple ORI starships fit very well into the style of the later seasons of SG1 and the ORI arc, it’s a partial win at best and while the power of the ORI has a question mark against it the power of their believers is very real and here right now.

This weeks promo is for The Rusted Robot Podcast a show hosted by Shawn and Brigitte which has news, interviews, reviews and just a lot of entertaining chat about all things that entertain fans of science fiction and geeky things in general, you’ll enjoy it. Next week we are going to be looking at the Atlantis episode The Tao of Rodney you know the one where Rodney gets super powers and then looks like his brain will blow up, good times good times as Lucius would have said, hope you join us for that. As always we would love to hear from you, feedback wise it’s a little quiet but Facebook and Google+ are ticking over and the twitter feed is a madhouse for all things Stargate.