While searching for a power drain in the depths of the city Rodney and Radak along with a science team discover an active lab and terminal, full of himself and in response to a wager Rodney is careless and is zapped by an energy ribbon, he regains consciousness and everything seems to be fine but it isn’t and now no donut is safe as he develops a voracious appetite to sustain his ever increasing mental superpowers which include telepathy and telekinesis. Further investigation reveals that the lab was exploring the means to artificially accelerate the ability to ascend (similar to what Anubis was attempting) and the machine scanned Rodney’s DNA and made adjustments which if all went well would allow him to join those that went before him. Of course Rodney at his best is not 100% comfortable with himself and the mental component is eluding him, without the physical and mental being in perfect sync the changes to his brain will kill him. 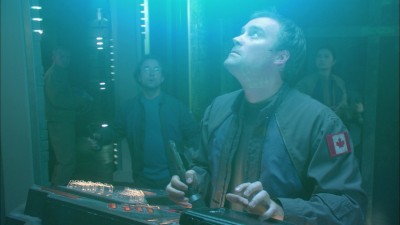 Ooops, I did it again!

Tao of Rodney is another great episode of Stargate Atlantis and allowed David once again to push Rodney into areas of this psyche and personal interaction he has never been at one with, the joys of his superpowers as you would expect make his day but the realisation that he may not be ready and ultimately die causes him to look inward and try to address some of his shortfalls helped by John in particular but the understanding from people who are his friends despite how he may have treated them in the past. One thing this episode really gets right is the cinematography, the episode looks fantastic despite so many scenes shot in restricted lighting, all credit to the director and his DP ( Michael C. Blundell ) for making the HD presentation of the episode so stunning. I personally really enjoy the Tao Of Rodney but it does get some mixed reviews but I think overall the episode has a very strong position in the third season of the show especially given it’s standalone nature.

Many thanks to Brad for joining us this week and the podcast promo we chose to include was for the Sci-Fi Movie Podcast a fantastic weekly show that reviews and discusses all manner of movies in the genre we all have a passion for. Next weeks show will be taking a look at the SG1 episode Bounty and the ups and downs of a High School reunion when intergalactic bounty hunters are hot on the trail of SG1, hope you join us for that and don’t forget to let us know what you think of our show and Stargate, thanks to Mack for commenting on last weeks episode over on our Google+ page.