Jonas begins to experience the effects of the DNA manipulation forced on him by Nirrti while on a misson to a world that used to be under the control of Baal but is now overseen by another Goauld. Mott claims to still serve the system lord but is in effect exploiting the people for his own ends to acquire Naquadah and the power that brings. The leader of the slave community tells SG1 of a prophecy about a group of powerful weaponed travellers who will free his people from enslavement by the false gods cue SG1. Jonas falls ill after having visions of what turn out to be potential future events both on the planet and in the SGC and is diagnosed with a brain tumor but with SG1 in trouble can he put off the surgery long enough to foresee a future where they survive? 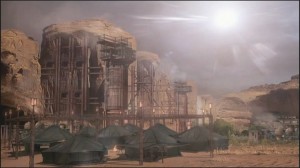 I would have built huts at least.

Prophecy is an out an out Jonas episode written before the confirmation of a seventh season and produced as the last episode of the sixth season. It’s wonderfully shot with a good mixture of matt paitings, location work and indoor sets which convey a much bigger world then you might expect and we see once again even within enslaved communities there are those humans that support the status quo, fear or power being the driving force. The usual questions over destiny and fate come to the fore as Sam points out under one methodology predicting the future is possible but acting on the very events prophecised will change the expected results but another argues what happens always happended. An example of the latter is when Jonas sees Sam being injured on a mission so she stays behind and gets the same injury via an accident on the base. 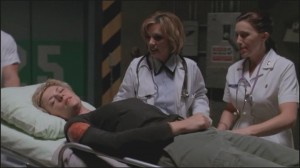 Jonas is convinced he can influence the future events to save Teal’c and Jack along with SG15 who are walking into a trap laid by Mott with the intent to gain access to the SGC and it’s lowered Iris. The irony is that Mott who himself has betrayed Ba’al actually believes that by serving up the SGC he can gain favour with Anubis, I’m not sure the uber System Lord has anytime for traitors no matter what gifts they bring.

Prophecy is not a real standout episode, in many ways it’s a filler especially given the events in the seventh season and the Ba’al/Mott/Anubis story line doesn’t go anywhere but at least there is more to come from Anubis and Ba’al. 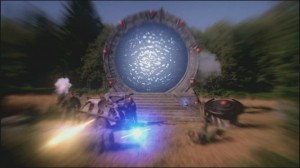 Thanks for the feedback this week (mainly from out FB portal) and the tweets while we recorded are always fun. Next weeks episode is the season 6 finale “Full Circle” so love to hear any comments and the promo for this week is from Scott and Miles of The Scifi Diner Podcast.