It was Friday October 28th 1994 when an American/French scifi adventure movie co-production opened in the US, directed by Roland Emmerich and produced by Dean Devlin Stargate came to fruition. 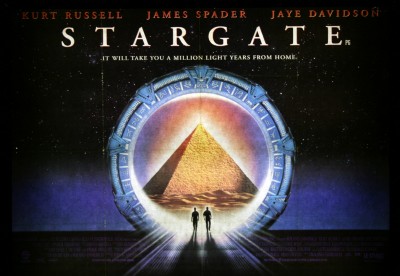 An alien piece of technology is discovered in a dig site surrounding the Great Pyramid and the device is taken to the US under military control, decades of research lead nowhere until Daniel Jackson an author and archaeologist who believes the Egyptian culture had been influenced by alien life is brought on board. He solves the riddle of the device and with the Stargate activated a group of Airforce personnel along with Jackson travel to an alien world and discover a human culture enslaved by the ancient Sun God Ra complete with the Egyptian paraphernalia and pyramid spaceship.

As you would expect the team are at cross purposes, destroy the gate to prevent this Ra from returning to Earth now the portal has been opened or lead these people into a rebellion to throw down this despotic being who rules with fear and force.

The movie made a modest box office return in the US but it’s worldwide receipts were excellent pushing this $55 million movie into serious profit returning $196 million yet no sequel was on the horizon despite the goal of a movie trilogy. It wasn’t until a few years later when MGM who owned certain rights (distributed the feature alongside Canal+) were brought a project for a TV series based on the movie by Brad Wright and Jonathan Glassner, this series became Stargate SG1 and premièred on Showtime to both popular and critical acclaim and worldwide acceptance.