In orbit the wreckage of the alien invasion fleet threatens the International Space Station but some nifty work by the resident cosmonaut saves the day but then the SGC loses contact with the station. Later a Russian Colonel is assigned to the SGC under the agreements with the various nations that have been let into the secret and he requests SG1 but General O’Neill rather abruptly smacks him down. The Russian later collapses and a chain events begin leading to a Lockdown/Foothold situation as the humans attempt to hold out while searching for the entity which can possess the bodies of humans.

Lockdown is a decent attempt to continue the Anubis storyline even allowing for the destruction of his fleet but as we know he is only partially corporeal so becoming some sort of energy based life form makes a lot of sense. The bottle show nature of this episode also works well, being located in the standing SGC sets will save money but also works to give us the feeling of confinement something the personnel of the base are having to deal with. 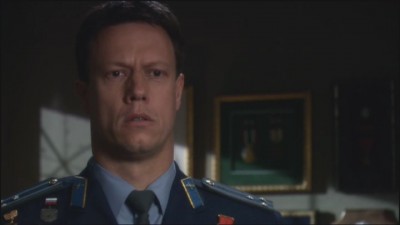 We have some good banter between the main characters and the introduction of a new doctor which was essential, the loss of Janet left quite a big gap in the running of the facility and well all scifi shows need a good doctor it’s kinda written in stone.  There is also a familiar face as Aaron Pearl returns to the show playing a Major after playing the young Lt Hammond in the episode 1969.

There were some technical issues  this week, we lost the first recording of SG1 Lockdown so had to do a rerun which is never quite the same, alas we lost part of the second recording of Lockdown as well before finally getting it in the can. I had to role back a release of the recording program and all has been well since then but then when do you update to the latest release, the trust has gone. Some creative cutting and pasting has given us an episode that is in sync despite some gaps in our coverage which have filled so enjoy and as always let us know what you think.

This weeks promo was from the Flash Pulp podcast, a creative outlet for thrice weekly pulpy type audio fiction/drama, very entertaining and a good community. Next week we are going back to Atlantis and covering the episode “Hide and Seek” so comments will be well received for inclusion in it’s feedback segment so keep posting on the various portals it really makes everything worthwhile.