In the 14th episode of Stargate Universe “Human” the crew of the Destiny have to deal with some bad decisions by the gate team who venture into some tunnels within a long abandoned and derelict city. The tunnel system collapses blocking the exit and trapping Chloe, Scott, Greer and Eli underground with no way to navigate the complex pathways, they can however contact the ship and relief is sent to help dig them out but the clock is ticking and ultimately Lt. James and her people are unable to reach their friends and are forced to return to Destiny. Meanwhile depending upon your point of view the A or B story deals with Rush who after some tweaking of the “chair” has connected himself to it in the hope of revealing the key to the Destiny which they believe will allow them full control of the ship. 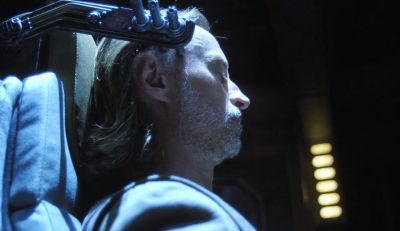 Human is very much a Rush episode despite the rather traumatic events going down on the planet which themselves would easily carry an episode. However seeing so much back story to the enigmatic Rush is very absorbing even though we are seeing him experience his past (Louise played his wife Gloria perfectly) knowing it’s not real so his actions are different to what they were. That said so much is made clear and provides an explanation as to the character we first met in the opening episode who then proved to be rather aggressive, arrogant and short tempered. It was probably fitting that the sacrifice Franklin made by trying the chair first paid off allowing Rush to commune with the computer system of the Destiny and it was an interesting to see the merging of his psyche with the AI of the ship. We still are not clear as to what the Ancients equipped the ship with in terms of control systems, there seems to be some intelligence maybe even sentience there but it’s clear the Destiny is far from a starship controlled by simply programming. I was a little disappointed that the excellent choices in music during the episode were not more key to solving the puzzle of the ship but they did lead the way and maybe even Rush was able to learn something about himself which will temper his interactions with the crew.

Rush aside it was a little reckless for the gate team to enter an unstable tunnel system in pursuit of a kino, it was simply a bad decision and a few more bad choices left them in an untenable position, the consequences of which may take quite a while to play out but the drama of time running out and then Destiny jumping to FTL was intense. Overall a very good episode with two significantly different stories and kudos to the director and cinematographer for making the two very different visualisations of the events work and look so well.

I want to offer me thanks to Thomas for joining me on this podcast, Alan was unavailable to it was just the two of us and we had a good time with an episode I was not sure would hold our interest after so many viewings, I was wrong. Our thanks to both Mack (Google+) and Brad (voicemail) for the feedback and continued support from the Stargate fan community. This weeks podcast promo is for Treks In Scifi and next week we are going to be watching and chatting about the fifteenth episode “Lost” and we hope you listen and let us know what you think about the episode and any other other aspect of the franchise.

There is a tragic loss when an Atlantis team and the remaining population of a world are wiped out by an Asuran warship but hope is at hand as the Apollo and the Daedalus arrive in Pegasus newly equipped with the Asgard beam weapons in the hopes that combined with the intelligence provided from the tracking module taken from the Asuran breakaway group they can fight back. The plan is to inflict serious damage on the Asuran ships currently wiping out the human populations of planets within the galaxy and ultimately drive the Asurans back to their homeworld and once again to reach a stalemate. Rodney looks to pimp his own plan for an enhanced virus to nullify the Asurans but he is getting nowhere and so the secondary plan of brute force is given the green light and once the battle is joined the human ships rack up an impressive number of kills. Faced with defeat in large scale operations the Asurans regroup in their home system which forces the humans ships to knowingly enter into a killing zone but Rodney has finally had a breakthrough. He has created his own crippled replicator and once embedded into the replicator city it can trigger a subroutine in its coding which forces the bonds between the nanite building blocks to shrink drawing them ever closer together and to lose their ability to act, eventually they will be a mindless blob of material which can then be wiped out by a synchronised explosion of ZPM modules. To aid in this plan Todd offers support from the Wraith and Larrin brings some of her fleet into the battle, together they engage the Asuran fleet in their own system with the intent to buy time for FRAN (Rodney’s pet replicator) to do her thing. It’s all going to plan but then the power grid fails making the ZPM option moot, Sam correctly surmises that the planet being rich in neutronium (Material replicators use to build themselves) and being highly unstable it could also act as a catalyst and as the replicator blob compresses and sinks ever further into the planet a chain reaction is triggered and with moments to spare the fleet jump out as the planet is destroyed. 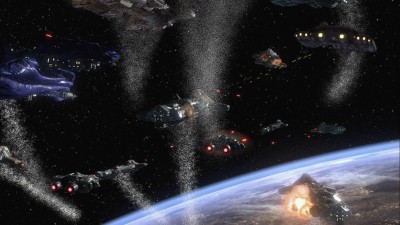 All My Sins Remember’d was a very expensive piece of television at least in terms of the budget for the Stargate live action shows and you can see where the money was spent, credit though to the producers as while they spent a lot on visual effects they also secured the return of some of the recurring actors who only bring status to Stargate. You can not really beat Mitch or Michael in command of a F304 when going into battle this time alongside seven Hives and ships from the Traveller fleet. The pretty pictures aside we got a kick ass story following on from the mid-season finale “This Mortal Coil” and it also wrapped up the Asuran arc within the Atlantis storyline, some fans of the series would not be disappointed to see them go if I was being honest.

Ultimately this episode and it’s first part of you paired them directly together are a highlight of the season, well written with lots of action, some humour and good character pieces sprinkled in within the booms which added greatly to the overall feel good factor of the episode, a credit to everyone involved.

Many thanks to first time guest Andres who joined us on fairly short notice, it was a pleasure to have yet another new voice and nationality on the show. This weeks promo is for Tuning Into SciFi TV and next week we are going to watching episode twelve of this fourth season “Spoils of War” in which the Wraith have a surprise or two for Atlantis, Todd the scamp. We hope you can join us for that and as always we’d like to know what you think about Stargate and our show and of course a rating or review on itunes or Stitcher would be most welcome.

While Sam is doing an experiment in phasing technology as derived from the technology Merlin left behind and unexpected event occurs and she wakes in an empty lab only to find that things are not as they were, Major Lorne is the leader of SG1 and General Hammond is back in command of the SGC. After interrogation she convinces the General she is there by mistake and while their Sam has been lost they agree to help our Sam return if she in turn helps to prevent an imminent attack on Earth by the ORI by solving the energy generation problem they were working on. Alas that proved impossible so Sam expanded the phasing device to blanket the entire planet and fed with the energy output of the entire United States the planet vanishes and survives the ORI attack but now as a media darling and political pawn Sam is going nowhere. 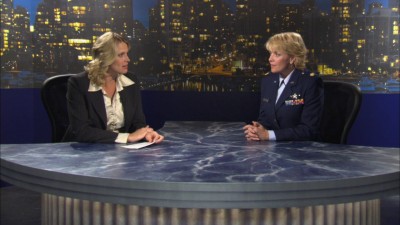 The Road Not Taken is another example of the alternate timeline/reality plot often used in Stargate and it has to be said it’s used a lot because it tends to work very well given the technology and characters we know and love in the series. It’s no surprise that the ORI like the System Lords are front and center for a divergent story line and in this one the Earth has pulled back from the galaxy as a whole and stands alone having missed the opportunities for exploring Pegasus and other revelations that came from ongoing galaxy wide exploration. Of course the reveal of the Stargate during their conflict with Anubis certainly shook things up and that perhaps shows while the disclosure has to be done sooner or later it also has to be handled in a controlled and delicate matter to avoid the panic and civil unrest. Of course the twisting of democracy to give the US president almost limitless power has corrupted things and the use of alien derived tech to crush opposition only shows how broken this Earth is. On the upside we did find out that McKay married Sam and he does seem to be a far more balanced and straight forward individual and of course Hammond remains the military man with his feet firmly in the camp of serving the people not controlling them. Overall a good solid episode if you can ignore how some of the events came to pass, the explanation for the transfer of Sam to the other Earth is a little sketchy and they totally gloss over how she returned but hey still fun and Amanda got to play dress up and boy did she look good.

Thanks to Brad for joining us for the show and this weeks promo is for Nutty Bites, next week we are going to be looking at the Stargate Atlantis episode Irresponsible which sees the return of two fan favourite (or maybe not) characters for their final appearances in the franchise, hope you join us for that. In the meantime we would love to hear what you think about the show and maybe if you have the time a review/rating over on itunes or stitcher would be very welcome, Stargate Forever.