SG4 the Russian team return to the SGC with a native of the world they were investigating who claims that Nirrti is using his people in genetic experiments and his entire settlement is now empty and those still under her control are being victimised. Given that Jack and the SGC were behind the deal which allowed Nirrti to go free their own guilt triggers the next stage of the mission as SG1 and SG4 return with the task to remove Nirrti once and for all and if possible save the people of this planet. 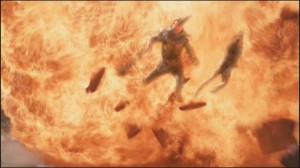 The existence of SG1 and it’s Russian personnel along with the own weaponry is a nice expansion to the SGC and the show in general, I’m not sure in the real world if it’s a great idea given the mindsets of the two nations but in this context it’s adds to the flavour to the show. The return of Nirrti via a story written by James Tichenor (VFX Supervisor) and Jacqueline Samuda (Nirrti) had to be done since she was a loose end and not part of the System Lord kabal under Anubis making her a wild card and as we move away from the traditional Goa’uld as the bad guys her fate had to be known. 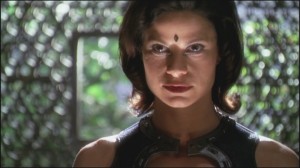 Metamorphosis has some good location work and Nirrti’s palace while limited to two sets looks pretty funky although the matt painting has it as an uber palace on top of a mountain. The prosthetic work for the natives is excellent, they really do look like they have been through the ringer and credit to Alex and Dion for performing under all the latex. To continue the costume theme the wardrobe department hit the nail on the head with Nirrti, lots of uplifted cleavage and leg worked to the extreme by Jacqueline and loved the Mrs Robinson homage.
Given what we know the episode once again proves that Jonas and of course Corin are well suited to the show, they have matured into the story and being different to Daniel/Michael that I believe makes them work. 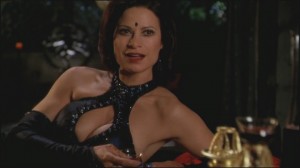 Too late, we warned you.

This weeks promo is from Tuning Into Scifi Tv and next week we’ll be watching and talking about the episode Disclosure, a bottle/clip episode that is a lot better than you think. Thanks to Colin for the voicemail and Kavin for the itunes review as well as our new listeners and FB Gatecast members. If you have anything to say about our show or the episodes we cover then please get in touch with us via email, twitter, contact form, facebook or G+ etc.