Thor’s ship has been destroyed but a lone replicator has survived and boards a Russian submarine.
The US capture the ship and the only way to make sure this replicator is destroyed is to
do in person so Jack and Teal’c with a couple of red shirts board the vessel and discover
they are indeed replicating, the machine not Jack and Co. Meanwhile Sam is on a distant Asgard world working with Thor to create a strategy to defeat 3 replicator controlled Asgard ships which are inbound.

Small Victories kicks off the fourth season beautifully, we have two story lines with Sam going it alone and proving her worth as an out of the box thinker (not her usual role) but also offers up a lighter side to this episode with her interaction with Thor. Daniel is still basically on the side lines thanks to Michael Shanks recent operation leaving Jack and Teal’c to go close quarter combats on board the the submarine which was a genuine vessel and looked gorgeous thanks to the show moving to 35mm filming. 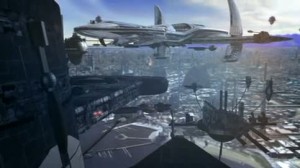