Fifteen years ago tonight the US pay television broadcaster Showtime did the world a huge favour by premièring it’s new serialised scifi series Stargate SG1 to it’s pay audience. I suspect back then this was quite a significant step for the subscription service which underlines how good a product Brad Wright and Jonathan Glassner put together not to mention strengthened by the work of Rob C Cooper, Peter DeLuise and many many other “heroes” of the show:)

“Sunday’s two-hour premiere episode of the MGM Worldwide TV Group series “Stargate SG-1” generated for Showtime’s highest-ever ratings for a series premiere and ranks as the highest-rated original movie to premiere on Showtime in 3-1/2 years, according to the network.
It was learned through Nielsen that “Stargate” on Sunday tallied a healthy 10.5 rating in Showtime’s approximately 12 million U.S. households, or just shy of 1.5 million homes in total.“
Source: Variety 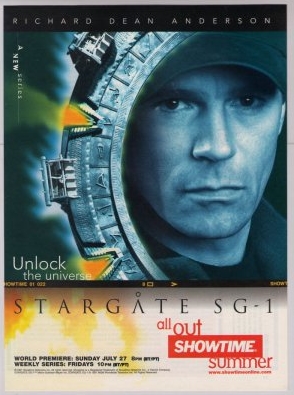