SG1 step through the gate and reappear in the SGC, a mystery to them but more so for Hammond who tells them they have been gone for hours with no contact. They then start to hear voices, well one voice talking to all of them and Urgo appears before them an entity only they can see and much hilarity ensues.

Without any doubt Urgo is a comedy episode especially written to exploit the talents of Dom DeLuise the father of Peter who has directed and worked with the show for a while now. The story is undemanding but in essence only exists to allow the cast to have fun ad-libbing and basically goofing off, Teal’c the perennial straight man has probably the easiest episode of the series requiring only use of expressions. The only negative as Alan points out time and time again is that if you are not a fan of Dom then the episode can fall a little flat but if you are a fan it’s a blast. 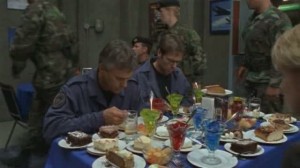