Whilst paying respects at the funeral of Omac a leader of the Tollan people SG1 are invited to return to Tollana and discuss the acquisition of advanced technology something which has always been denied them before. Narim the doomed guy who quite fancies Sam (and the feeling is returned to a certain degree) is concerned as the change in his worlds policy feels wrong even more so when it is said Omac’s death was the catalyst. 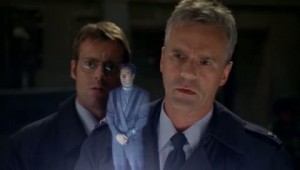 As it turns out the council offers the Earth a big honking space gun capable of orbital firing and taking out ships but one wouldn’t be enough we would need at least 38 plus redundancy but surprisingly in return for the mineral Trinium that’s what they will give them. As all the alarms bells start ringing the investigation into the death of Omac indicates he may have been murdered and a widespread cover up is under way but the ultimate purpose is still unclear until the discovery of what the Trinium is being used for and who is responsible for the change in policy. 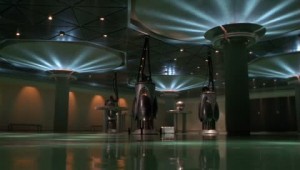 I’ve said it before but I personally enjoy episodes which build on previous outings as it’s a pay off for not only being a long term fan but it all adds depth to a series, everything can become important or explored. Narim of course has been circling Sam on and off since “Enigma” with Garwin Sanford playing the role to perfection so it’s was mildly disappointing the episode ended how it did. Of course this episode isn’t just a call back to the Tollan but the Goa’uld make their presence known and mix in the effects of the protected planets treaty with the Asgard we get a fairly deep episode. All in all it was very good, some nice character work, good mix of plot points and excellent CGI/Matt work not only for a TV show but for a production period.