SG1 return to the SGC unexpectedly but during their debriefing some of their knowledge of events is out of sync with what we know and then the gate is activated and another SG1 returns. Confusion is the order of the day until it dawns on the General that the first SG1 are not really “his” unit but the same people from another reality, this is made clear when more SG1 units begin to turn up a few with team members who have long since died in this reality.
Multiple Samantha Carters come up with a potential solution and our SG1 along with the first unit head out on the Prometheus towards the black hole they believe is at the root of the problems. Then the fun begins…

Ripple Effect was intended to be a bottle show making use of all the existing standing sets with limited expense on outside talent, as it turned out having Teryl and JR reprise their roles couldn’t have been cheap and there is no getting around the complexities of body doubles, split screen and the rapidly progressing motion control camera techniques for having multiple versions of the same character on screen at the same time. As it’s been said the story may have been sacrificed to the altar of technical achievement but if you believe that is the case then maybe the guest stars and yes the production quality more than makes up for it, this time. I’ll admit seeing Janet and Martouf again put a great big smile on my face and having the variants of SG1 using a lot of the older costumes and props were well worth the admission price. I’m not sold on Cameron in his undies but the dressed in black “bad” SG1 were fun and at the end of the day they were
doing pretty much exactly what any SG1 would do if their Earth was in danger.

Thank you to everyone that tweeted and posted on Facebook and Google+ over the last week, Epiphany didn’t set the groups on fire but no question that MALP on a Stick was well received. Kudos to Brad for once again recording a voicemail while on the road, always appreciated as is any feedback in any form especially ratings and reviews over on itunes and Stitcher. This weeks promo is for The Sci-Fi Movie podcast and next week we return to Atlantis for the episode Critical Mass.

in 7 episodes of Stargate SG1, he fancied Sam and that  rarely ends well:)

He has also recently worked on Teen Wolf and The Secret Circle. 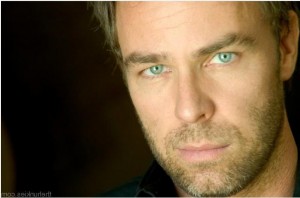