A delegation from Kelownan arrives to discuss the possibility of an alliance despite the events which led to the death of Daniel Jackson, Jonas Quinn stealing some Naquadria and then turning his back on his home world. The three visitors a scientist, soldier and diplomat ask the SGC for military aid in exchange for more of the Naquadria as their nation is now the target of a new alliance between the two other states on their world and war is imminent. With technology similar to our 1940’s they face overwhelming odds in terms of man power and strategic aircraft and their only ace in the hole is a Naquadria bomb whose power rivals any of the SGC’s most modern enhanced nukes. Jonas enters into discussions with his former mentor Dr Kiernan who claims an internal resistance is looking to overthrow the current government and with similar movements with the Andari and Tiranian nations with the goal of peace and prosperity. 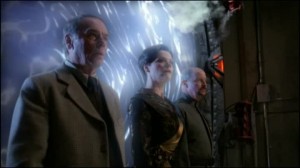 The SGC have a big decision to make, they know that giving the Kelownan’s even some basic military technology aimed at defence  will eventually be used in an offensive manner and they show some mature restraint given our worlds oft used policy of arming societies with weapons well beyond their means and suffering the consequences.

Shadow Play is a merging of two proposals/stories aimed at given Jonas more background as well a homage to the movie “A Beautiful Mind” and it does that but falls a little flat despite a stellar guest performance from Dean Stockwell as Dr Kiernan. You could even argue it’s very much in the vein of a Trek morality tale and in many ways that would be correct, it’s a little more subtle but the message is certainly relevant when you look at the state of our world. 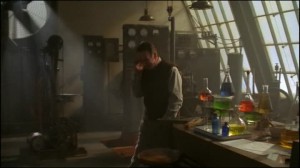 The episode is also interesting as Jack seems to be channelling Daniel at times, granted he has an aversion to the Kelownan’s due to their betrayal of Daniel so he’s never going to be waving the flag in support but he seems well into sync with the Tollan/Nox attitude of limited or no technical assistance beyond basic humanitarian. Overall an interesting episode with some some top notch casting but more of a drama than an action piece with some wonderfully moody lighting.