Here we are again for another bonus episode, we are paying a second visit to the world of RL Stine and The Haunting Hour series for the episode “Sick” which tells the tale of a young lad who is feeling under the weather and finds himself alone in his home as some strange events take place in and around the house. It may be a case of him being delusional thanks to the illness and medication or maybe everything that is happening is exactly what it appears to be, has an alien lifeform taken residence in his home, do the government know all about it and the messages coming from the tv are genuinely offering support and a lifeline is his battle to save the world. 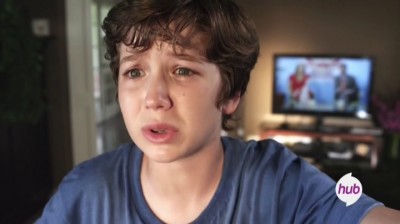 Sick is a season two episode of The Haunting Hour and stars Garrett Ryan as Alex the young lad who talks to himself way too much, has rather bad personal habits and seems to be quite a handful and may be a little too pampered and spoiled for his own good. It could be that once alone his overactive imagination kicks in combined with the smothering of his mother and her talk of “quarantine” all comes to a head and this alien invasion emerges to pretty much ruin his day. The beauty of this episode is that we are left not quite knowing the actual truth, there is evidence that it’s all in his imagination but also we are presented with enough evidence to believe he is the victim of a conspiracy and fighting for his life.

It was just Alan and myself this week and next week we have the final bonus episode and we’ll be looking at Farscape, we’ll let you figure out the episode in question but it’s a good one so we hope you join us for that. Once the Farscape bonus episode is done we will be returning to the regular Stargate shows beginning with the Atlantis episode “The Return” and Miles joined us for that.

Yes I know it’s way too easy to spot a familiar face from the days of Stargate on Cedar Cove and not just in front of the camera but the joys of not seeing trailers is that you can still be surprised so surprised I was when Julia Benson appeared in the seventh episode of the second season “One Day at a Time” playing Jeri Drake a reporter from Jack’s past and stirring things up quite a bit. I’m not sure if I like the character or that I don’t want Julia to be playing a bit of a bitch even if there may a reasonable err reason for her actions:)

Thanks to Bloody Disgusting for posting the trailer which stars a number of faces you will recognise from Stargate and genre television. Death Us Do Part was written and produced by Julia and Peter Benson with Ryan Copple.
IMDB

Click here to be taking to the “Brawn and Beauty” interview. 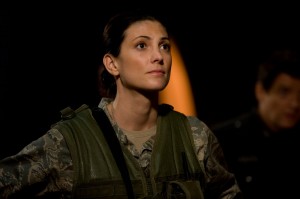