At the Antarctica facility a discovery is made in the ice near the location where the gate and DHD were found. A body is revealed embedded in ice which is close to 50million years old, the surprising bit is that there are signs of life and who would has been around that long ago and surrounded by technology that is linked to the gate system?

SG1 arrive at the base after all who else but our heroes could handle a pure science mission, yeah I know it really doesn’t make sense at the point, after the woman is revived and her heritage identified then yes it makes more sense to have SG1 on hand. That said I love this style of episode even more so when it’s in an icy wasteland, The Thing and ICE (X-Files) all exploited the huge scale yet paralysing confinement at the top and bottom of the world, oh lets not forget that episode of House either:) 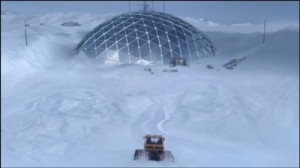 Are we there yet?

Things start to go wrong when SG1 and the scientists fall ill, no co-incidence I guess and as we know the Ancients had to deal with a plague on Earth and this could be it and now the clock is ticking and not everyone can be saved. 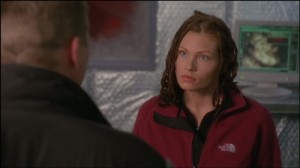 Praise must be given to Ona Grauer who played Ayiana and if you watch some of the behind the scenes extras on the DVD you see how she had to put up with the body moulded plastic required to put her into the ice cube rather than a dummy. It really does pay off in the episode, no question Ayiana is real and in the ice and you do get the feeling she is helpless when lifted from the ice. Shooting on the same stage as the season 1 episode “Solitudes” extra ice-conditioning is fitted to shoot in -2 degree temperatures which allows the cast to work in warm gear and not cook, it all adds to the atmosphere of the episode. 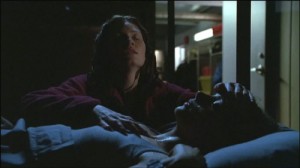