Teyla is having some troubling nightmares involving the Wraith, it may be a little anxiety due to the approaching hive ships or something a lot deeper. She shows an obvious lack of focus when sparring with John and he makes sure she has her first contact with the expeditions psychologist Dr Heightmeyer and after being told to rest and not gate to the Alpha site she eventually has a face to face with the psychologist and reveals that some of her people used to hear voices and so a visit to Carson is on the cards. He flies Teyla to the mainland where she meets Charin an elder who lets Teyla into her own secrets that she is a descendant of one the people returned to their world by the Wraith and it was these returnees who had the “gift” to hear the Wraith’s voices.
Upon returning to Atlantis and armed with this knowledge they attempt through hypnosis to engage her gift and she is successful in accessing Wraith onboard the approaching hive ships but in a twist a Wraith gets access to her but one thought remains, they want the Earth. The Alpha site is then compromised and Bates who is sure it was Teyla sees his paranoia about her people raise a notch. The rewards of knowing what the Wraith are upto swings Weir into deciding to attempt the contact again and Teyla gets possesed and pretty much kicks ass until Bates stuns her with a Wraith rifle but what now, can Teyla with her Wraith DNA ever be trusted? 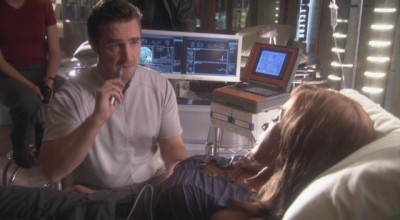 The Gift is an episode which allows Rachel to exercise her skills as well as giving the prosthetics a good work out, we also get some valuable information on her people and background but make no mistake this also paves the way for the bigger budgets required for the season finale.
The episode doesn’t get any rave reviews but I personally think it’s required to add depth to Teyla and her people but also allows for an extra bit of impetus and potential conflict for The Siege and well it gives Bates something to do. We’ve seen in Stargate SG1 that the Gou’ald have at times experimented on humans to achieve some payoff so it’s no surprise the writers of Atlantis chose to use that plot element once more, I’m not sure it really paid off in the grand scheme of things but it’s perfectly fine for this episode. Teyla has some good character pieces with Dr Heightmeyer played by Claire Rankin and yes we have a psychologist/therapist on a scifi show that actually does her job. 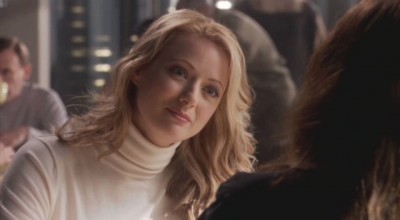 We had a bumper crop of feedback for Threads on our facebook group and a few other things so that was obviously a popular episode, I wonder how it’s doing in the poll, when not check it out. The promo this week is Pulp Audio Weekly which is just geeky fun so why not click on the link and have a listen, you may just enjoy their show.
Many thanks to Brad for joining us this week and next week we discuss part 1 of the Stargate SG1 Season 8 finale “Moebius”.