The Stargate is beamed away in the middle of the night shift, poor old Walter never gets a break. The SGC investigate Area 51 as a possible source of the security breach which allowed the gate to be painted with a tag to allow beaming using Asgard technology. Tealc is still off world dealing with majar bio-weapon attacks against the Jaffa including worlds which are home to rebel groups. The finger points to the Tokra but as the two stories merge we once again see the desperation or fanatacism of the Trust who casual slaughter millions seemingly unworried about possible retaliation. 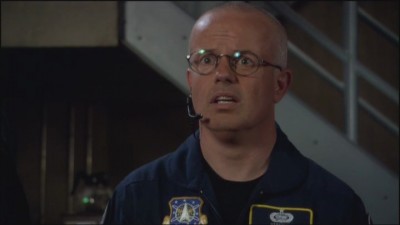 Endgame is in essence the second part of the double feature with Affinity, the same members of the Trust after gaining the codes required to operate an Ancient coded device return with a fully functional cargo ship with Asgard tec on board. They’ve combined the symbiote poison and Earth based missile systems with the gate to create a good delivery system and have already hit three worlds killing both “good” and “bad” Jaffa but also an unspecified number of Tok’ra.
The pacing of the episode is excellent with both action and drama sequences plus quite a bit of humour which you wouldn’t expect from a story dealing with the beginnings of a campaign of genocide but we see the two sides in a clear light, the SGC handling a problem the Trust taking a sledge hammer to it. 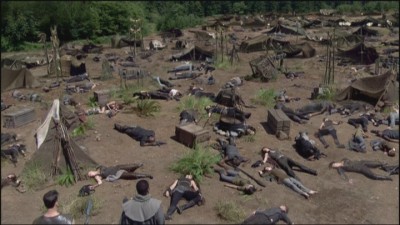 Now that was a party

It’s not clear if Jack’s hesitation in ordering the capture/destruction of the cargo ship was due to the presence of Sam and/or Daniel on board but it’s clear that maybe command of the SGC is still not quite site comfortably on his shoulders. Hammond made the job look easy but he did have decades of experience behind the desk before taking over and Jack has had to deal with a quite a bit in a very short space of time.
I personally liked Endgame, a good well written and produced episode which does benefit from being watched soon after Affinity and we are left with a few loose ends which will need tieing up later.
This weeks promo is from The Holodeck and next week we are covering the Stargate Atlantis
episode The Storm so get those comments in for inclusion, speaking of which thanks for the discussion on the Facebook group, Home generated some buzz.
If you want to get in touch with us then you can use this websites contact options and we can also be found on Facebook, Google+, Twitter, Stitcher Internet Radio and of course itunes and we always welcome a review/rating on that site.