Jack goes off the deep end and steals some Tollan technology after diplomatic discussions fail to provide the Earth with more advanced technology. Faced with alienating the Tollan the device is returned and Jack is allowed to save face (and jail time) by resigning but after a week he is already bored and then gets an interesting offer.

Shades Of Grey follows on from the events in Pretense and as before the Tollan are reluctant to provide advanced technologies to other races in fear of the use they will be put to even if by default they are not military hardware. They have a valid point but events which first began back in Touchstone as Earth humans are operating behind the backs of the SGC and maybe the results they get are not worth risking the goodwill of worlds the SGC (well SG1) have encountered. A third episode is even touched on as Jack requests retirement to the planet Edora (100 Days) which in context makes a lot of sense for the character.

Shades Of Grey is not the beginning of the political or third party faction arc which runs throughout most of the mid series season but it is significant as we see a well organised and effective group exploiting the work of the SGC. This situation will expand greatly over the next few seasons and thankfully the series never gets itself to embedded with the hard drama, they always keep it accessible for fans while adding a new angle to the show. 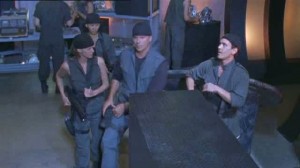 A visit to the world of Edora for trade negotiations reveals a world that is in peril from a meteor shower which returns every 150 years, when faced with disaster the SGC takes many of the people through the gate for protection but many are left behind after the gate suffers a direct hit. Jack is one of these people and when he believes there is no return to Earth he slowly embraces this new society developing feelings for Laira but the rest of SG1 do not know what giving up means.

A Hundred Days is one of my favourite episodes, the effects of the meter shower while not having the impact of a modern production still looked fantastic and we see a side of Jack which has only be hinted at through flashbacks and other devices. His relationship with Laira (Michelle Green) always flirtatious grew into something more serious leaving us with questions when the episode concluded with the rescue of Jack. I know where I stand on the pregnancy but it’s one of those contested issues of the franchise and alas it was never resolved. 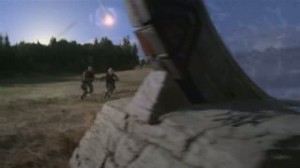