A simple case of poor timing means Atlantis continues the search for Teyla who was kidnapped by Michael so he can get access to her unborn and use its genetic material to enhance his hybrid creations, an unexpected bonus leaves Atlantis with an extra doctor who turns out to be a clone, it was a busy day. So Dr Carson Beckett is back on Atlantis unaware that he is a clone and that the original has died and also that Elizabeth was dead and worse of all his dear old mother also thinks he is dead, not much of a homecoming for the good Doctor. Dr Keller is able to prove to Carson that he is indeed cloned from the original albeit it with a fundamental flaw, science to the rescue and he is able to provide the coordinates to a potential facility used by Michael, the team investigates and they capture one of Michael’s soldiers and in return for safety in the Milky Way he provides the location of where Teyla will be heading. Meanwhile Teyla is indeed being held at that facility, Kanaan the father of her child is there but he has been altered by Michael to be little more than a slave but the remaining survivors of New Athos are also there and Teyla is reunited with Halling and other friends. The combat teams from Atlantis raid the complex, a huge firefight breaks out and in the chaos Carson and Teyla flee but are cornered by Michael who has created his “army” with inhibitors so they can never turn on him, Carson is unable to shoot Michael and Teyla is once again take by Michael as he escapes the planet in his cruiser. Carson now knowing there is no immediate cure for the degeneration of his cloned tissues enters into an Ancient stasis chamber, a final goodbye and he is gone again and maybe return when a cure is found. 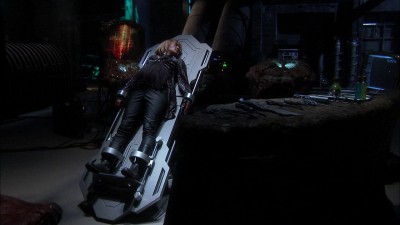 The Kindred Part 2 is a strong second episode of this two parter, plenty of pyrotechnics and stunt work when adds to the action quota for the episode but an awful lot of well written character pieces, it’s rather brutal how hard it was for Rodney to explain to clone Carson exactly what he was and what had been happening in the meantime and having Sam have serious reservations also worked well, she didn’t know Carson so there was no prior emotional ties to hamper her immediate concerns. Michael as per usual was well played by Connor and he no doubt appreciated the story moving the character away from the traditional look of the Wraith, less time in makeup and an easier time of it when filming scenes in 45 degree temperatures. A solid episode as the fourth season comes close to it’s end and interesting to hear that this story was bumped forward in the shooting schedule to allow Rachel to have her child, credit to Rachel who was obvious very close to term when filming many of the scenes which could not have been very comfortable.

Many thanks to Brad for joining me on this episode, once again Real Life is proving a little more complex for Alan at this time when it comes to record but things are settling down now he is in work and looking for his own place. We’ve recorded all the shows now for season 4 and will be looking at some bonus shows for the upcoming holidays and starting the fifth season, the two Stargate SG1 movies may be pushed to early 2016 and of course soon after we’ll be starting Universe.

This weeks promo is for The Batcave Podcast and excellent show for fans of the 1966 classic tv series and next week we are back with the season four finale “The Last Man”, we’d love to know what you think about the episode and our show so any feedback would be most welcome.

A mandated day of rest and Carson is eager to go fishing on the mainland but one by one his friends duck his invitation and Rodney goes as far as to use Kate as an excuse to renege on his promise to accompany Carson. Elizabeth meanwhile is playing footsy with a rather dashing civilian member of the expedition but her own ethics and maybe doubts push her towards the more solitary position while in command of Atlantis. Tragedy strikes when an explosions kills a young scientist and it’s discovered her own body created the explosive in the guise of a tumor which was created when
she and a colleague were exposed to an Ancient device which was emitting radiation. Carson is unaware he is preparing to operate on the other scientist whose body is a time bomb but as we would expect he refuses to leave the patient to die and the consequences for the turtles are dire. 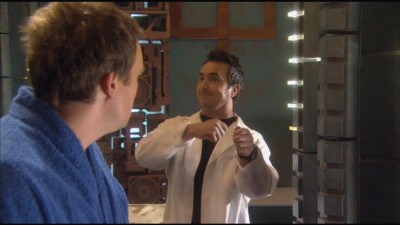 I don’t think we need to say too much about Sunday, a fun episode which has a very dark underside and you really get suckered into happy and fun feeling that Atlantis is enjoying with the totally unexpected results of the explosion and death of Dr Harriet Hewston and injury to Teyla. It was good to see Dr Watson played by Daniel Bacon who had also played a technician on Stargate SG1 and the style of the episode with flashbacks and multiple viewpoints was a perfect choice to tell the story.

Paul McGillion did himself and his character proud and we may look back and wonder if the writers could have done a lot more with the character in the three seasons he was on the show but we’ll never know but at least this isn’t the end for Carson, scifi shows never really kill off anyone so we may just get to see the good Doctor some time in the future. Many thanks to Thomas for joining us on the show, US, UK and Finland scheduling can make things interesting but we got the job done and Thomas will be returning for the SG1 finale in a few weeks. This weeks promo was for the Tuning Into Scifi podcast, an excellent resource for genre television news, reviews and features. Next week we will be looking at the Stargate SG1 episode Family Ties when we get to meet Vala’s father and that should be a lot of fun, we hope you join us and don’t forget to let us know what you think of the episode and Stargate in general.