A visit to a known inhabited world once again reveals the Wraith have decimated the local population and quite recently, while returning to the Stargate a lone dart arrives and beams up McKay and Lt Cadman.
John with no option orders the ship destroyed and luckily the hull remains pretty much intact and it is possible to access one of the the stored patterns, McKay is beamed out and they hope with his talents along with the science personnel in the city they will be able to retrieve Cadman. Of course nothing is that easy and when McKay awakes he is shocked to discover that he is sharing his mind with the consciousness of Lt Laura Cadman and once they convince Carson of this fact no end of fun and games ensue including a date for Mckay with Dr Katie Brown with Carson in tow, three bodies and four minds, oh the fun that could be had. 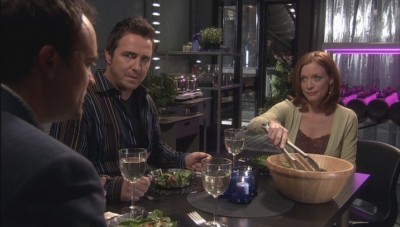 Plenty to go around

Duet was written by Martin Gero and introduced Dr Brown and Lt Cadman, both characters especially Cadman should have had more time on the show but both added greatly to the stories and regular cast arcs the show was offering at the time. No apologies were made in regards to paying homage to the Steve Martin movie “All of Me” and David was really allowed to go to town playing the two people inhabiting the one body helped to a huge extent by having Jaime on the set to read her lines and show how she would react to the everyday events. We also got some great back and forth between McKay and his science team and the “b” story with Ronon was entertaining as well, everyone loves the gun range scene. Nothing really needs to be said about the smooch:) 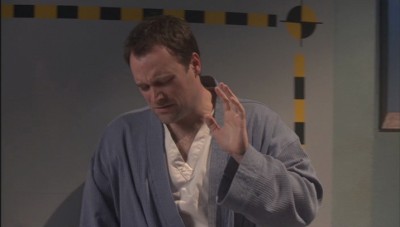 We welcome Adam for his first appearance on the podcast, he lives in the US and once again we had to juggle time zones but we got it all recorded and I think we all had a good time. Thanks for the feedback on Facebook and the chat on twitter, Stargate is all the more better for the community it has generated around itself. The fourth and final question for our 200th episode competition is in the episode so email in the answer and any of the previous answers to the first three questions if you haven’t done so. The drawing will be done next week and announced in the 200th episode which will be the Stargate SG1 “The Powers That Be” which Brad joined us for.

Jaime Ray Newman guest starred in the recent episode of GRIMM (S2E6 Over My Dead Body) which aired in the USA on NBC on Friday the 5th of October. She reprised her role as Angelina the Blutbod and once again lets her affections for Monroe govern her actions. Jaime has been in many scifi series including Stargate Atlantis playing Laura Cadman as well as roles on Eureka, Eastwick and Supernatural. 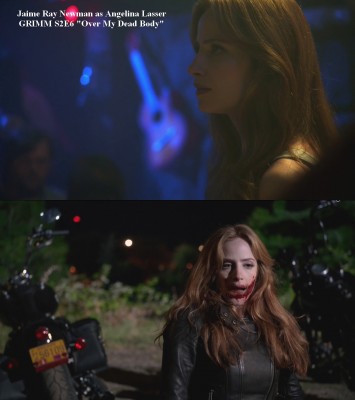