Sam and Jacob study the Ancient superweapon on Dakara and discover that it is capable of rearranging elements on a galactic scale and by using the Stargate network the modified energy pulse could be used to target only the Replicators in the Milky Way galaxy. Baal who has been sent by Anubis to retake the planet is roped into programming the weapon to meet the specifics of the Replicators and to enable the gate Network into dialing every gate at the same time, it’s an all or nothing play.
Daniel meanwhile is aboard Replicarters ship and is still being interrogated while the replicators assault the Gou’ald fleet in orbit around Dakara and they hit the SGC at the same time, as their total victory approaches Daniel is able to gain control of the machines and give Sam, Jacob and Ba’al just enough time to trigger the superweapon and in a matter of seconds the galaxy is purged of replicators. 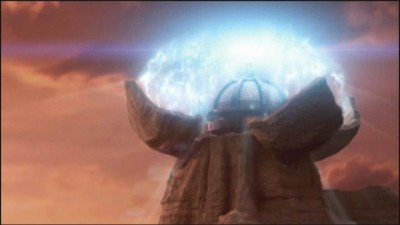 They don’t do anything small.

Bra’tac boards Ba’als flagship and attempts to capture the System Lord but he flees and that action as well as the taking and keeping of Dakara proves to enough Jaffa that freedom is within reach and the age of the Goa’ald is almost at an end.

Reckoning Part 2 continues with the action and suspense provided by the first part of the double header, Jack does his thing in the SGC as the Replicators run wild and we have the usual action and humour SG1 was known for. The epic space battle (more implied than seen) is wonderful with more than a nod to Star Wars which via the episode commentary seems to have been a Robert C Cooper sort of thing. We also get the politics and self interest which turns Ba’al away from Anubis which could seal his doom but as we find out in episodes and seasons to come Ba’al is a little harder to kill than the average Gou’ald. 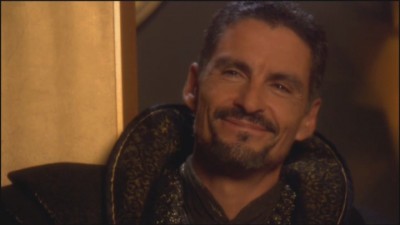 I laughed at your rebellion!

Reckoning is simply one of the best episodes of Stargate SG1, more so because it’s a double episode and both parts are strong enough to stand alone let alone in tandem. The production value is off the charts with live action on large sets, matt and composite backdrops, great CGI and top notch acting and writing. It’ll be interesting to see how it fares in the season 8 poll but the votes may be split leaving some other strong episode to win the day.
Many thanks to Brad for joining us this week and for his voicemail regarding Letters From Pegasus and we got some Facebook feedback and a little twitter action during the recording of the show. I also checked the US itunes store and we got a couple of five star reviews so a big thank you to qapla_be’Hom and Lost In The Gate. We would love to hear from anyone about anything Stargate not just our own view of the franchise and you can contact us via this website or via Twitter, Facebook, Google+ or Email. This weeks promo is from Trek News & Views an excellent Star Trek podcast and next week we are covering the unofficial third part of this trilogy with Threads,  Jeff  joins us for that show.