Welcome to the final seasonal bonus show, this week we are looking at an episode of Farscape entitled Green Eyed Monster which was written by Ben Browder and deals very heavily with the John and Aeryn relationship, set within the third season the bulk of the story takes place on board Talyn with Crais as an ever present brooding element and one more entity that can easily be overlooked. While it can be considered a very shippy episode lets not forget that at this point John has been cloned or more to the point duplicated, there are literally two of him one on board Talyn and the other on Moya so there is still plenty of scifi involved not least the living ships that inhabit the Farscape universe. We also get plenty of laughs (to offset the drama) thanks to Stark and Rygel on board the shuttle pod who play chicken with the huge Budong after Talyn has been swallowed and may only reappear as a waste by product. 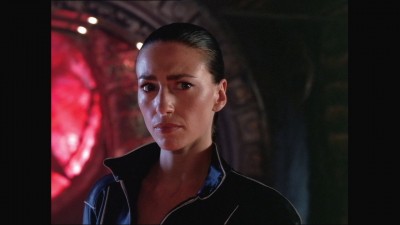 Green Eyed Monster is one of my favourite episodes of Farscape, it’s pretty much a stand alone in the season arc but does become the pivotal point of the relationship between Aeryn and this John who is technically the same John as on board Moya but obviously has his own memories from the point of duplication. Having two Crichtons also means the writers were free to well kill off a major character whenever the mood struck them and as the story progresses here and on Moya that too will complicate the romance within this classic scifi series.

Many thanks to everyone that has listened to our bonus shows, the numbers always dip over the holidays as everyone has better things to do and more time to do them but we’ve been very pleased with the response however next week we are back with the regular Stargate shows and first off for 2015 is The Return parts 1 and 2 in a feature length show, Miles from The Scifi Diner Podcast will be joining us for that so stay tuned.