The 17th episode of the final season of Stargate Atlantis is “Infection” and deals with some of the ramifications of the retrovirus in one of it’s many forms. A Hive ship is approaching Atlantis and a corrupted message is received from Todd, a jumper rendezvous with the Hive and they find all the Wraith in stasis but with no automate revival time set in the system. Rodney searches the ships database and discovers that the retrovirus/gene therapy had been given to the whole crew but after initial good results something went wrong, drastically wrong. Malfunctions are evident on the Hive and then a scream and a security guard is found dead, well half eaten it seems the Wraith can no longer feed by drawing life force but the infected have still got teeth. 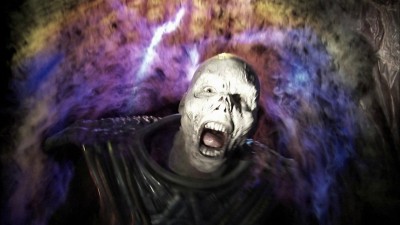 They wake Todd who is not too happy given that they are no position to save his crew but as more of the infected get loose and the hive slowly loses integrity being affected by the virus itself they find themselves in a decaying orbit. Rodney is bullied by Todd to perform above and beyond and the Hive or what is left of it crash lands into the ocean where they few survivors are rescued. John who gave his work asks for permission to release Todd and he leaves hoping to find a cure for the virus in an old tradition of bonding with an Iratus Queen.

Infection is an episode that exists to tie together some plot points and to make the most of Todd (Christopher Heyerdahl) and to be fair it does a decent job with the atmospheric horror leaning story. The production side provides some great CGI visuals as the hive breaks apart and the standing set never looked better but money must have been tight when the crash was created, that looked bad. However you never get a bad episode when Todd is front and center and once again he shows why this character became a fan and production favourite.

We didn’t have a guest this week as it was a spur of the moment recording and well outside of the planned schedule but we had fun. This weeks promo is for Treks In Scifi and next week we are taking a look at the eighteenth episode of the final season “Identity” so hope you join us and let us know what you think.