Sam, Jennifer and Rodney pay a visit to M5V-801 to confirm to the local population that the mining work the Genii forced upon them two decades previously was going to have grave consequences for their settlements. However on their way the grounds collapse and the three of them find themselves in an unknown abandoned mining complex with little to help them escape. They try to improvise a number of ways to reach the glimpse of sunlight far above their heads but the results are all negative and bring a fresh collection of injuries and the situation continues to get worse. The building they are in is on long stilts which are slowly giving way as the load increase thanks to soil pouring into it from above but maybe the way out is to be found by going deeper rather than higher. 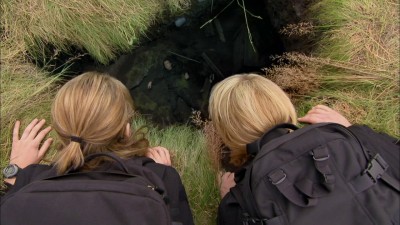 Trio is very much a character piece, pretty much a one location show and allows the already established dynamic between Rodney and Sam to flourish making it very easy to ease Jennifer into the group and a by product is that it opens up the possibility of a relationship between Rodney and Jennifer especially after he made so much of a mess with Katie a few weeks before. The show was also intended to be a bottle episode, limited sets and guest stars but logistically it turned into a nightmare, very complex set pieces and a lot of CGI to removes wire work from the scenes where it was impossible to use doubles. Overall though while at times it can feel a little stretched the story is entertaining and offers up a lot to the regular viewer of Atlantis, maybe not so much to a first timer viewer.

Many thanks to Phil for joining me on this show, this was his first time on Gatecast but since it was recorded in January 2014 not the first time you’ve heard an episode he has been on. This weeks promo is for the Sci-Fi Movie Podcast and next week we are going to be joined by Brad for the excellent Midway, let us know what you think since it’s been gratifying to get some feedback these last couple of weeks:)