Wormhole X-Treme! is a television show in production which tells the story of 4 intrepid explorers who travel through a circular device which houses a wormhole, show creator is one Martin Lloyd aka Marty who the SGC met a year or so back and discovered he was an alien along with others of his race living on the Earth. The SGC are willing to let this show be made as a double bluff, it automatically debunks many potential claims that the Stargate program is real but then a ship is tracked moving in the solar system and identified as being Martin’s mothership so Jack goes undercover at the tv studio to make contact. 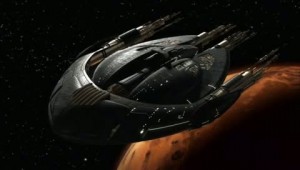 This of course is the 100th episode of Stargate SG1 hence spoofing themselves in truly a cheesy manner and for the longest time I really wasn’t over impressed with this celebration of all things Stargate but truth be told I’ve taken a lot more from it this time around. The antics on set with the 4 actors playing parodies of SG1 along with all the cameos from the production staff and yes the basic story which concludes the Martin Lloyd story arc (for now).

Anyhow not only do we get all the in-jokes and spot the crew games but the filming using the real studios and back lots adds much to the flavour of the episode and again building on previous characters/stories tends to work more often than not. We also get an expansion of the NID in relation to how they co-exist with the SGC, lots of interesting stuff to come there with Agent Barrett. 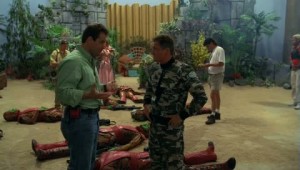 Is Wormhole X-Treme! a fitting celebration of the 100th episode of Stargate? Well yes it is but maybe the blend of the spoof and the main story wasn’t as neat as it could have been and maybe that was why I wasn’t keen on this episode for so many years but it does pay off if you commit fully to getting every reference and homage out of it.

Thanks to Adriana and Thomas for joining us for this cast, it was a lot of fun. 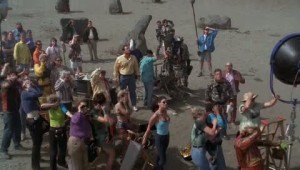 Emote to the tennis ball people!