Sam returns to the Air Force Academy and discovers a young cadet who may at this age be smarter than Carter was in her day but there is an attitude problem which Sam convinces the General to let her adjust. Meanwhile a run of the mill baby sitting operation for Jack and Teal’c turns into a life and death struggle once Sam and her protegee turn up, the two are not directly related but they boys were doing fine:)

This is the first episode for Jennifer Hailey the very smart young woman who Sam takes under her wing including being introduced to the SGC something quite unusual even though it’s obvious there are dozens of personnel who are not much older. Jennifer is played by Elisabeth Rosen and while on the subject this is also the first appearance for Dr Bill Lee played by Bill Dow. A rather surprising addition to this episode is a cameo from General Ryan a real honest to god member of the Joint Chiefs. 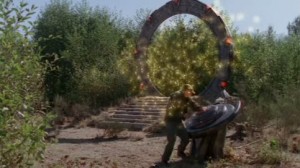 Prodigy is a good episode, we’ve got some good new characters and actors portraying them and the two plots merge smoothly bring three of SG1 together for the final confrontation with an alien species one which the humans were more than likely responsible for.

Now for the apology…

We’ve been asking for feedback every episode and we’ve being getting some but after a gentle prod from our listener Thomas in regards to missing feedback we’ve found some messages on the old email address. Not sure if these were direct emails or wordpress forwarded ones (spam filter in action) but at least we’ve got them so sorry folks for the delay and thank you for the feedback.

Thanks to the following friends of The Gatecast…

We’ll do better in the future both in terms of monitoring the spam filter and checking the old email but for the record the current Gmail is mentioned in each podcast but that’s not an excuse:)